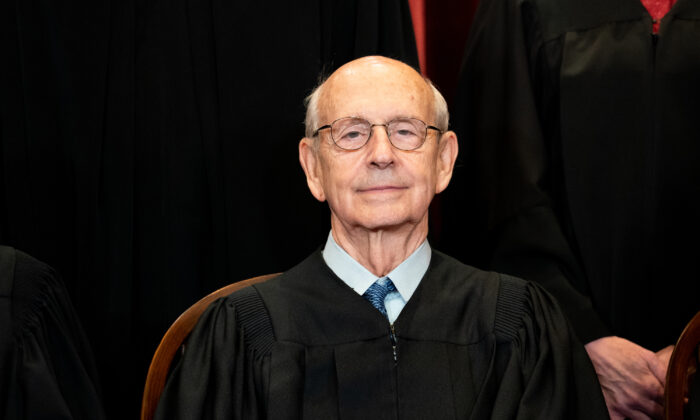 Associate Justice Stephen Breyer sits during a group photo of the Justices at the Supreme Court in Washington on April 23, 2021. (Erin Schaff/Pool/Getty Images)
Judiciary

Schumer on Wednesday issued a statement saying that Breyer will step down from the Supreme Court at the end of the court’s term in the summer of this year. It came after numerous unnamed sources spoke to media outlets saying that Breyer, 83, would retire.

The Epoch Times has contacted the Supreme Court press office for comment.

White House press secretary Jen Psaki wrote Wednesday on Twitter that the Biden administration won’t be commenting about reports of Breyer stepping down.

“It has always been the decision of any Supreme Court Justice if and when they decide to retire, and how they want to announce it, and that remains the case today. We have no additional details or information to share from @WhiteHouse,” Psaki wrote on Twitter.

The White House said last year Biden would nominate a black woman if a vacancy arose on the court.

Breyer, who is considered to be part of the high court’s liberal wing, was appointed by former President Bill Clinton, a Democrat. His replacement will have to be confirmed by the Senate, which is currently split 50–50 among Republicans and Democrats with Vice President Kamala Harris having the ability to break ties as president of the body.

Schumer said in a statement that Biden’s nominee “will receive a prompt hearing in the Senate Judiciary Committee, and will be considered and confirmed by the full United States Senate with all deliberate speed.”

Breyer has been the subject of significant speculation about whether he will retire. Left-wing activists and members of Congress have called for him to step down following former Justice Ruth Bader Ginsburg’s death in September 2020.

During an interview in August 2021 with the New York Times, Breyer asserted that he was struggling with the question of when he should retire.

“There are many things that go into a retirement decision,” Breyer said. “I don’t think I’m going to stay there till I die—hope not,” he added.

For years, Breyer also pushed back against claims that judges act in a political manner.

“My experience of more than 30 years as a judge has shown me that, once men and women take the judicial oath, they take the oath to heart,” he said last April during a lecture at Harvard Law School. “They are loyal to the rule of law, not to the political party that helped to secure their appointment.”

“If the public sees judges as ‘politicians in robes,'” Breyer also warned, “its confidence in the courts, and in the rule of law itself, can only diminish, diminishing the court’s power, including its power to act as a ‘check’ on the other branches.”

In the 2020 campaign, Biden pledged that he will nominate the first black woman Supreme Court justice.

Sen. Patty Murray (D-Wash.), the No. 3 Senate Democrat, called on Biden to name a black woman to the bench

“In the wake of Justice Breyer’s retirement, I want to voice my support for President Biden in his pledge to nominate the first Black woman to the Supreme Court,” Murray said in a statement Wednesday.

It’s not clear who the president might nominate, but some have speculated that Judge Ketanji Brown Jackson, a former Breyer clerk who was recently nominated to the D.C. Circuit Court of Appeals, may be tapped by Biden. Another possibility is Judge Leondra Kruger, 45, who serves on the California Supreme Court.