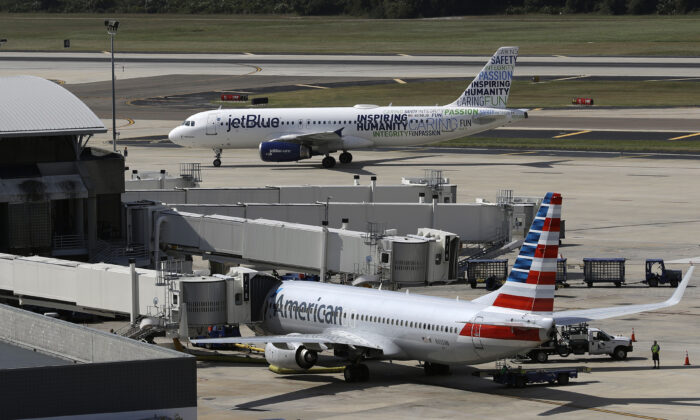 A JetBlue Airbus A320 taxis to a gate after landing, as an American Airlines jet is seen parked at its gate at Tampa International Airport in Tampa, Fla., on Oct. 26, 2016. (Chris O'Meara/AP Photo File)
US News

The Department of Justice (DOJ) filed a lawsuit against American Airlines and JetBlue on Sept. 21 to block an alliance between the two airlines that allegedly violates antitrust laws.

The lawsuit, which was filed in a Massachusetts federal court, focuses on the so-called Northeast Alliance between American and JetBlue, which combines their operations at four major airports in Boston, New York, and New Jersey. The DOJ alleges that the alliance would eliminate competition between the two airlines in those markets and elsewhere, leading to higher prices for consumers.

“In an industry where just four airlines control more than 80 percent of domestic air travel, American Airlines’ ‘alliance’ with JetBlue is, in fact, an unprecedented maneuver to further consolidate the industry,” Attorney General Merrick Garland said in a statement. “It would result in higher fares, fewer choices, and lower quality service if allowed to continue.”

American Airlines responded to the civil antitrust complaint with a statement from CEO Doug Parker, who said that Delta Air Lines and United Airlines dominated the New York market prior to the formation of the Northeast Alliance. The American–JetBlue alliance created a third competitor, he said.

“Ironically, the Department of Justice’s lawsuit seeks to take away consumer choice and inhibit competition, not encourage it,” Parker said in the statement. “This is not a merger: American and JetBlue are—and will remain—independent airlines. We look forward to vigorously rebutting the DOJ’s claims and proving the many benefits the Northeast Alliance brings to consumers.”

According to Parker, the alliance has created 58 new routes and increased the frequency of 130 others since the beginning of 2021. The airlines also added international flights to Tel Aviv, Israel; Athens, Greece; and Delhi, India.

JetBlue CEO Robin Hayes similarly touted the benefits of the alliance to consumers and rejected that it amounted to a merger.

“This is not at all like a merger with American—we have two different business models and are not working together on pricing,” Hayes said in a statement.

Hayes noted that the alliance is a way to break the hold on the major congested airports exercised by rival carriers United and Delta.

“While we have built a successful business in both New York and Boston, our runway for growth in the Northeast to challenge global legacy carriers Delta and United is limited,” Hayes said. “And I’m sad to say that our biggest obstacle to bringing more low fares and great service to the Northeast right now is the DOJ—the very government agency that should be making every effort to foster robust competition among airlines.”

The DOJ set the stage by pointing to statements from American Airlines (AA) officials that favored industry consolidation. The complaint, which was joined by attorneys general from six states and the District of Columbia, goes on to lay out how JetBlue’s aggressive low-fare strategy forced big carriers to lower their fares and threatened AA’s business.

“Recognizing the significant and growing threat posed by JetBlue, and not satisfied with the consolidation that has made it the largest airline in the world, American now seeks to co-opt JetBlue through an unprecedented domestic alliance,” the complaint (pdf) reads.

“Knowing full well that an outright merger would invite a challenge under Section 7 of the Clayton Act, American instead seeks to align JetBlue’s economic incentives with its own through a far-reaching partnership based on the same kinds of alliances that American has used to consolidate international air travel.”