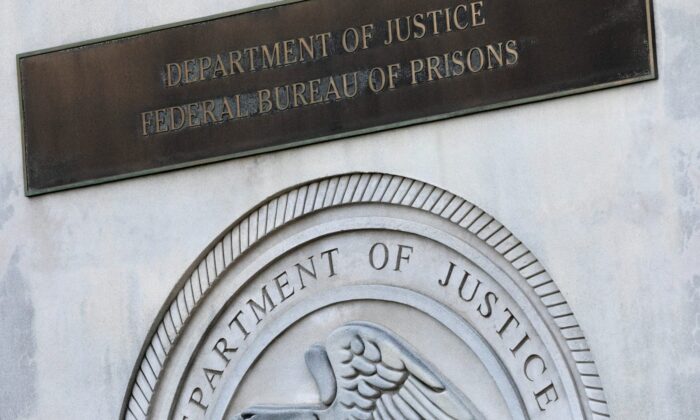 A sign for the Department of Justice Federal Bureau of Prisons is displayed at the Metropolitan Detention Center in the Brooklyn borough of New York, on July 6, 2020. (Mark Lennihan/AP Photo)
Executive Branch

The Department of Justice is paying $1.5 million to implement a “transgender programming curriculum” across all federal prisons.

The curriculum, which is still in the works with details to be finalized by Sept. 30, will teach “techniques to seek support for mental health concerns and skills to advocate for physical, emotional, and sexual health and safety,” the office of public affairs for the department’s Federal Bureau of Prisons (BOP) told The Epoch Times in a statement.

Overseeing the program’s development is The Change Companies, a private-owned entity in Carson City, Nevada. Since 2008, it has received $3.4 million in awards from the BOP in the states of Nevada, West Virginia, California, and Kansas. The July 2021 contract of $1.5 million for transgender-specific programming was one of the largest from the federal agency to date.

The BOP “recognizes the importance of appropriate gender-affirming management and treatment of transgender individuals in its custody,” the BOP statement read. “By entering into a contract with The Change Companies, the BOP is able to expand program offerings for transgender inmates.”

A total of 1,414—accounting for a little less than 1 percent of the 158,033 federal inmates under the BOP’s charge—currently identify as transgender, according to data provided by a BOP public affairs spokesperson.

The curriculum will involve three programs, which will include assistance to help inmates transition back into society, and a support group “addressing reentry needs and managing identity concerns,” the BOP said, adding that the programs will contain “full curricula and facilitator’s guides, the use of instructional workbooks, and videos.”

The agency stressed that it “maintains procurement integrity and compliance with laws and federal regulations when procuring contracts of goods and services.”

“The award of this contract was compliant with federal law and regulations to include fair pricing of the award,” it continued.

The BOP’s Transgender Offender Manual (pdf) from Jan. 13 requires that an inmate who identifies as transgender will first meet with a bureau psychologist and sign a consent form to request special accommodations.

The manual also includes policies for hormone therapy and gender-comforming surgery. Federal inmates seeking surgical intervention could request surgery if it’s “the final stage in the transition process,” after “one year of clear conduct and compliance with mental health, medical, and programming services at the gender affirming facility,” it states.

The Change Companies did not respond to a request from The Epoch Times for comments.

On April 11, the Department of State began allowing U.S. citizens to mark their gender as “X” on their passports.

The same month, the Department of Justice filed a complaint challenging a new Alabama law that bans certain transgender procedures and substances for youth.

In a bid to boost inclusion for transgender people in federal services, the White House is setting aside $10 million in its proposed fiscal 2023 budget to fund research on “how to best add questions about sexual orientation and gender identity” to the Census Bureau’s American Community Survey, the annual demographic survey of American households.