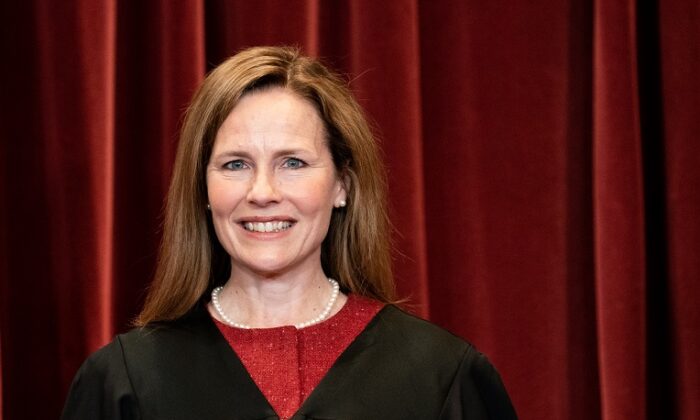 Associate Justice Amy Coney Barrett stands during a group photo of the justices at the Supreme Court in Washington on April 23, 2021. (Erin Schaff-Pool/Getty Images)
Judiciary

Justice Barrett: Supreme Court ‘Not Comprised of a Bunch of Partisan Hacks’

Supreme Court Justice Amy Coney Barrett defended the top U.S. court over the weekend, saying that the nine justices are not politically motivated.

“My goal today is to convince you that this court is not comprised of a bunch of partisan hacks,” Barrett said during her remarks to a crowd at the McConnell Center at the University of Louisville. “Judicial philosophies are not the same as political parties.”

Barrett, a Catholic who taught law at Notre Dame University, was introduced by Senate Minority Leader Mitch McConnell (R-Ky.) at the event, according to the Courier-Journal.

Justices on the Supreme Court, she argued, are often portrayed as being partisan, which she described as an unfair characterization.

“The media, along with hot takes on Twitter, report the results and decisions. … That makes the decision seem results-oriented,” Barrett said. “It leaves the reader to judge whether the court was right or wrong, based on whether she liked the results of the decision.”

She continued to say that “I don’t like the results of my decisions” but added, “It’s not my job to decide cases based on the outcome I want.”

Barrett became the latest Supreme Court justice following the death of Justice Ruth Bader Ginsburg last year, which triggered a political firestorm in Congress. Some Democrat leaders suggested that if their party took the majority in Congress, they would then expand, or “pack,” the Supreme Court with more justices that fit their ideological agenda.

Fellow Supreme Court Justice Stephen Breyer, in recent interviews with media outlets, issued warnings that if Democrats expand the court or carry out other actions to remake the institution, it will backfire.

“What goes around comes around. And if the Democrats can do it, the Republicans can do it,” Breyer told NPR last week as he was promoting his upcoming book, “The Authority of the Court and the Peril of Politics.”

Breyer, 83, has faced a number of calls from left-wing Democrats to step down from his position. By doing so, they argue, President Joe Biden can nominee a Supreme Court justice.

“I’m only going to say that I’m not going to go beyond what I previously said on the subject, and that is that I do not believe I should stay on the Supreme Court, or want to stay on the Supreme Court, until I die,” Breyer recently said in response. “And when exactly I should retire, or will retire, has many complex parts to it. I think I’m aware of most of them, and I am, and will consider them.”