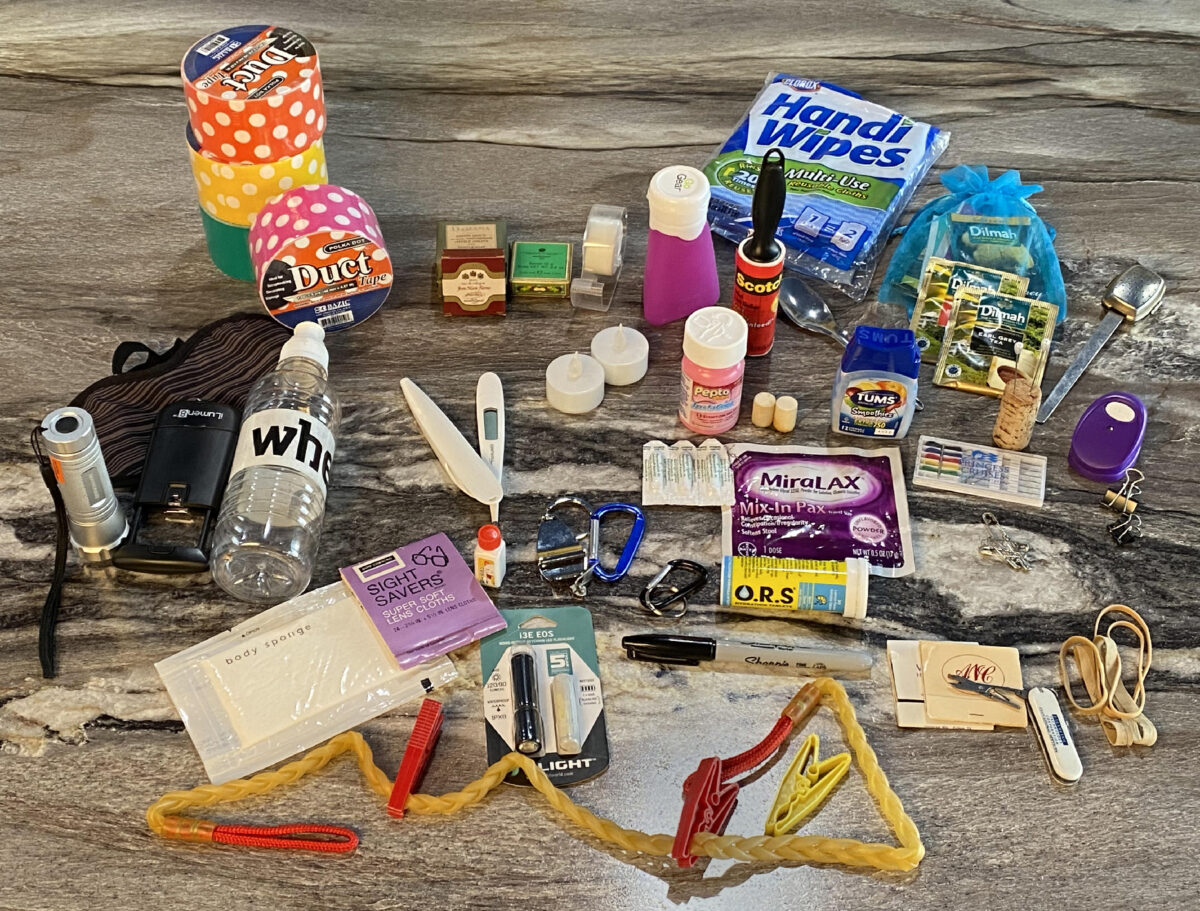 Packing a cache of useful items can prevent problems that could ruin a vacation. (Photo courtesy of Philip Courter)
Travel

‘Just in Case’ Packing for a Journey

“Why are you taking medications for two weeks longer than the trip?” my husband asked when I was packing for a recent trip to Italy.
“In case there’s a volcano in Iceland,” I replied, because ever since the Eyjafjallajokull volcano sent clouds of ash and dust into the atmosphere — interrupting air travel between Europe and North America by grounding more than 100,000 flights and stranding millions of passengers — I’ve packed defensively. The 2010 eruption was relatively small, but its impact was massive. Europe experienced air-travel chaos for almost a month. Although it was unlikely that anything similar would ever affect us, there was a volcano warning a few weeks before we flew to Ecuador.

What I called “prudent precautions” others deemed excessive overpacking — that is until February 2020, when we were quarantined in Japan for two extra weeks on the infamous Diamond Princess cruise ship, and then two more weeks on a Texas Air Force base. I only had medication for 10 additional days, and it took a heroic friend to gather everything and ship it overnight to Japan, then a supreme effort to retrieve the package from Customs.

Many of the peculiar items that we always pack are not only beneficial, but one might also have been lifesaving. Nobody knew how some people were being infected with what they were calling “a novel coronavirus” while isolating in our cabins. One theory was that the droplets were circulating in the air-handling system. Our engineer son suggested we cover the vents with duct tape. On earlier trips duct tape had mended a suitcase rip, a broken lock and a drooping hem, and it even splinted a broken wrist.

More mundane supplies also came in handy. The mini saltshaker I carry in case I need to make a rinse for sore gums or a sore throat perked up the bland food delivered to our cabin on the ship. We had an electric kettle, so my stash of tea bags was welcome, as were our emergency food rations: mixed nuts, dried fruit, snack bars, mini Babybel cheeses, chocolates and hard candy.

I also had a mini pharmacy of medications as well as printed prescriptions because Japan has stiff penalties for bringing illegal drugs into the country. One of our traveling companions had a recurrence of a troublesome rash and was grateful that we had her preferred ointment. Am I overly neurotic or just a well-prepared traveler?

To find out, I queried peripatetic Facebook friends about what they carried in case of emergency. Almost all of them described their first-aid kits with some smart additions such as Ace bandages, knee braces, alcohol swabs and packets of oral hydration solution, essential while battling “tourista.” (Or just keep this recipe handy: Six level teaspoons of sugar and one-half level teaspoon of salt mixed into 5 cups of clean or boiled water then cooled.) Campers and off-road warriors carry personal water filters or water purification tablets.

Most everyone carries a multipurpose tool such as a Leatherman or Swiss Army knife, packing it in stowed luggage so it won’t be confiscated by security — which happened to my husband twice. Many a corkscrew or bottle opener has salvaged a rough day — as have sanitary and birth-control supplies. My parents learned this fact when they were on a sailboat and had to hunker down in Block Island’s harbor to ride out a tropical storm. The result was my much-beloved younger sister. Like many other women I know, I carry a funnel device (reusable or disposable) that enables me to urinate when standing if facilities are absent or undesirable.

These days many of us travel with a folding walking stick. Mine has prevented stumbles on cobblestones, steep hills and broken sidewalks from turning into trip-ending falls. Tiny nightlights, powerful flashlights and matches also top lists. When an electric outage caused us to evacuate a hotel in the middle of the night, our son’s key ring flashlight was a godsend as we lumbered down 10 flights of stairs with our luggage.

Experienced travelers make sure to have duplicates of documents such as passports, IDs and airline information in both paper and electronic form. Before we leave home, we make photocopies of both sides of everything in our wallets. This precaution was essential when my husband was pickpocketed in Tahiti. One friend said she keeps a written list of important contacts in case her phone is lost since no one memorizes them anymore.

The complexities that COVID-19 add to traveling means that everyone has to prepare for a major change of plans, including isolating away from home if anyone in their group tests positive. Along with masks and hand sanitizer we now carry our own test kits. My cautious provisioning that some considered ridiculous is now routine for lots of people. Everyone needs to be ready — just in case.

WHEN YOU GO
Useful travel supplies can be purchased at www.magellans.com and www.travelsmith.com.