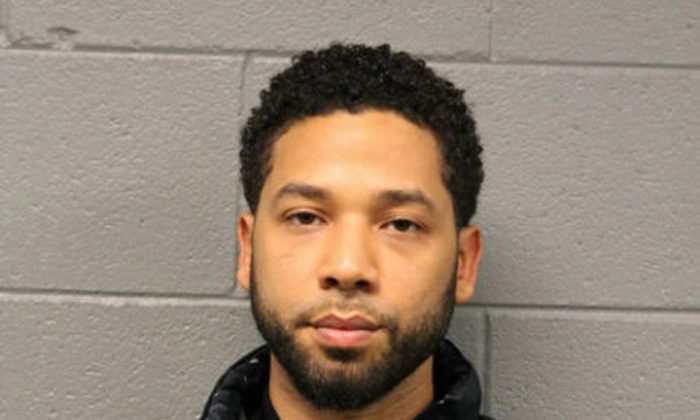 Jussie Smollett, the "Empire" actor turned himself in on Feb. 21, 2019 to face a charge of making a false police report when he said he was attacked in downtown Chicago by two men.(Chicago Police Department via AP)
US News

Prosecution documents relating to “Empire” actor Jussie Smollett—who faces felony charges for filing a false police report, a class 4 felony—reveal a text message likely to have been pivotal at the early stages of the hoax attack.

The bond hearing documents (pdf), obtained and published by TMZ, purport to show that on Jan. 25 Smollett sent a text message to Abel Osundairo, saying: “Might need your help on the low. You around to meet up and talk face to face?”

Abel and Ola Osundairo are the two brothers—and extras on “Empire”—who were arrested on suspicion of attacking Smollett but were released after reportedly telling the police that he orchestrated the attack and paid them $3,500.

Police sources cited by TMZ said Abel Osundairo and Smollett had been friends since 2017.

The Chicago Police Department announced late Wednesday that Smollett was officially a suspect in the investigation into an alleged attack against him.

Smollett originally claimed he was attacked on Jan. 29 in Chicago around 2 a.m. in freezing temperatures by two white men who shouted slurs at him and said “this is MAGA country,” an apparent reference to Trump’s slogan “Make American Great Again.”

Smollett also claimed he had been physically assaulted and that his attackers had looped a rope around his neck.

The story unraveled after police questioned the Osundairo brothers, who told investigators it was all a hoax orchestrated by Smollett.

“They punched him a little but as far as we can tell, the scratches and bruises on his face were likely self-inflicted,” Chicago Police Superintendent Eddie Johnson said at a press briefing on Feb. 21.

Johnson said that detectives found evidence that not only was Smollett behind the fake attack, but he was also behind a letter containing threats that was sent to him on the “Empire” set. The letter investigation is being handled by the FBI and U.S. Postal Service.

Sources with firsthand knowledge of the investigation told CBS Chicago that the brothers told police in a follow-up interview on Tuesday that Smollett was behind creating the letter.

Officers are thought to be investigating whether a letter which Smollett received a week before the attack was faked https://t.co/qbe4TJbdFo pic.twitter.com/zTWGBIZlQO

The letter also contained a white powder and prompted a police response on Jan. 22, the day it was received on the set. The white substance was later determined to be aspirin.

‘Dissatisfied With His Salary’

Johnson said at the presser Thursday that Smollett had allegedly staged the hate crime because he wasn’t satisfied with his salary on the show “Empire.”

“This stunt was orchestrated by Smollett because he was dissatisfied with his salary,” he told reporters.

Johnson said that he was personally upset about what Smollett allegedly did in filing a false police report.

“This announcement recognizes that ‘Empire’ actor Jussie Smollett took advantage of the pain and anger of racism to promote his career,” Johnson said. “I’m left hanging my head and asking why.”

“Bogus police reports cause real harm. They do harm to every legitimate victim,” Johnson added. “I’m offended by what’s happened and I’m also angry. This publicity stunt is a scar that Chicago didn’t earn and certainly didn’t deserve.”

Johnson also noted that a slew of people seized on the initial news of the attack, relying solely on Smollett himself, and tried to blame it on President Donald Trump and Trump supporters.

“Celebrities, news commentators, and even presidential candidates weighed in on something that was choreographed by an actor,” he said.

Many of those who reacted initially have declined to respond to the update, while others have said it didn’t matter that Smollett appeared to make up claims of an attack.