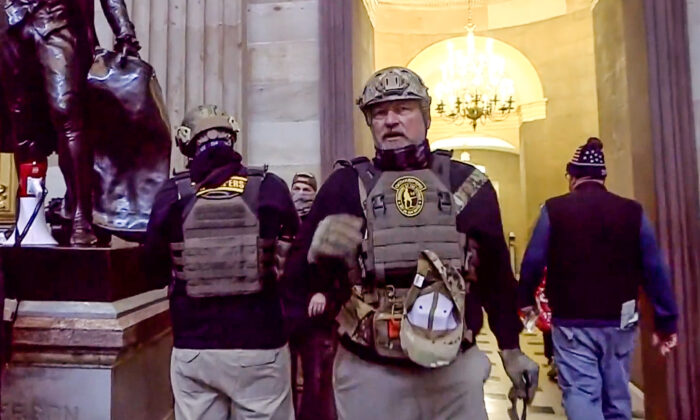 Two Oath Keepers inside the U.S. Capitol on Jan. 6, 2021. (U.S. DOJ/Screenshot via The Epoch Times)
By Madalina Vasiliu

Mehta brought to the courtroom a total of 44 prospective jurors whom he qualified during the week despite their strong feelings about Jan. 6, 2021.

The prosecutors had the chance to strike six jurors and the Oath Keepers’ attorneys 15. Their preferences, though, were anonymous.

Mehta questioned potential jurors about their experiences, including whether they had discussed the case with others, been contacted by the press, or if they would have any difficulties showing up for the trial throughout the next six weeks. They all responded no to the judge’s questions.

Among the final pool are jurors who worked for the Department of Defense (DoD) and the Government Accountability Office.

The juror who worked for the DoD is a middle-aged woman who mentioned her interest in “housing, homelessness, and certain disparities” while expressing no comment about the events of Jan. 6 or supporters of former President Donald Trump. When the defense lawyers questioned her ability to be impartial in the scenario that the defendants would have beliefs contradictory to her interests, she had no response.

The woman didn’t watch news coverage about Jan. 6, saying, “I was concerned, but I wasn’t interested.” She also told the court she has no issues with individuals who possess firearms. She said that people who carry them should be responsible.

The juror who works for The Government Accountability Office is a man who said he learned about the Oath Keepers from reading The New York Times.

He doesn’t hold a positive impression about the Oath Keepers since, he said, they gathered on Jan. 6 to stop electoral votes from being certified. The man was in Florida on Jan. 6 but worried about his property in the district and his friends who reside nearby on Capitol Hill.

Despite his experience and views related to Jan. 6, he told the judge that he will put aside his knowledge about that day when he will evaluate the evidence in court.

Another juror currently works in the field of information technology and is former employee of The Washington Post. He had never heard of the Oath Keepers. He said that regardless of the defendants’ political beliefs, he would still be able to assess the evidence objectively during the trial. The man said he understands that people have different political views.

The motion explains, “testimony or evidence referring to the defendants or the Oath Keepers as antigovernment, extremists, racists, etc. would add nothing but prejudice into what already promises to be an emotionally charged trial. For instance, the descriptor “antigovernment” could stir particularly negative feelings among District of Columbia jurors, many of whom work for, or adjacent to, the government.”

Mehta is still considering the motion.

The trial will officially start on Oct. 3 and is expected to last from four to six weeks. Stewart Rhodes, the Oath Keepers’ former leader, is a defendant, along with Kelly Meggs, Kenneth Harrelson, and others.