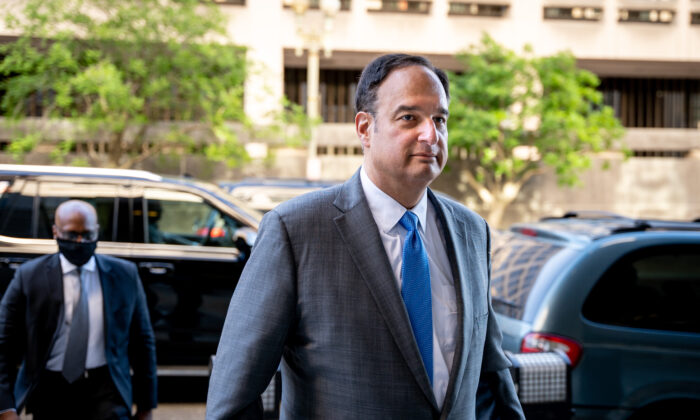 Michael Sussmann arrives at federal court in Washington on May 18, 2022. (Teng Chen/The Epoch Times)
US News

A jury on May 31 found former Hillary Clinton campaign lawyer Michael Sussmann not guilty of lying to the FBI.

Sussmann was charged with one count of lying to the government because he told a bureau official ahead of the 2016 presidential election that he was not bringing derogatory information about then-presidential candidate Donald Trump and Russia on behalf of a client.

“I have something time-sensitive (and sensitive) I need to discuss,” Sussmann wrote to FBI lawyer James Baker in a text message before the meeting. “I’m coming on my own—not on behalf of a client or company—want to help the Bureau.”

Baker testified during the trial that Sussmann repeated that he wasn’t acting on behalf of a client during the actual meeting, which took place one day after the text.

Both Sussmann and his firm later acknowledged he was bringing the information on behalf of a client, though they claimed it was not on behalf of Clinton, Trump’s 2016 presidential rival.

Prosecutors say Sussmann worked with Rodney Joffe, who has said he was promised a position in a potential Clinton administration, and the Clinton campaign to promote the information to the FBI in an attempt to sway the election.

Clinton campaign manager Robby Mook testified that Clinton herself approved the plan to spread the allegations, which claimed that the Trump Organization had a secret backchannel with Russia’s Alfa Bank, to reporters, but said campaign officials did not approve of Sussmann taking them to the FBI because they worried that would cause media outlets to delay reporting on them.

FBI experts quickly determined the information from Sussmann did not back up the allegations and the CIA later concluded the claims were not “technically plausible.”

Jurors began deliberating on Friday and reached a verdict Tuesday, their first day back in court after Memorial Day weekend. The verdict followed a 10-day trial in the E. Barnett Perryman Courthouse in Washington.

The jury reportedly included several Clinton donors, who were kept as jurors despite objections by prosecutors. It also included a woman whose daughter is on the same crew team as Sussmann’s daughter.

The case was the first one brought by special counsel John Durham, who was appointed during the Trump administration to probe the origins of the government’s investigation into the Trump campaign’s alleged links with Russia.

“While we are disappointed in the outcome, we respect the jury’s decision and thank them for their service. I also want to recognize and thank the investigators and the prosecution team for their dedicated efforts in seeking truth and justice in this case,” Durham said in a statement.

“I told the truth to the FBI and the jury clearly recognized that with their unanimous verdict today,” Sussmann told reporters outside the courtroom.

“Despite being falsely accused, I believe that justice ultimately prevailed in my case.”

Durham previously secured a guilty plea from former FBI lawyer Kevin Clinesmith, who doctored an email to say that Trump campaign associate Carter Page was not a CIA asset when, in fact, he was. Clinesmith received probation.

Durham has also charged Igor Danchenko, a Russian citizen, with making false statements to the FBI. Danchenko was the primary subsource for the dossier compiled by ex-British spy Christopher Steele in an effort to get Clinton elected. Authorities say Danchenko falsely told agents during interviews that he never communicated with longtime Clinton associate Charles Dolan about information that was later placed in the dossier when Danchenko actually sourced some of the allegations from Dolan.

Danchenko has pleaded not guilty and is set to go on trial later this year.