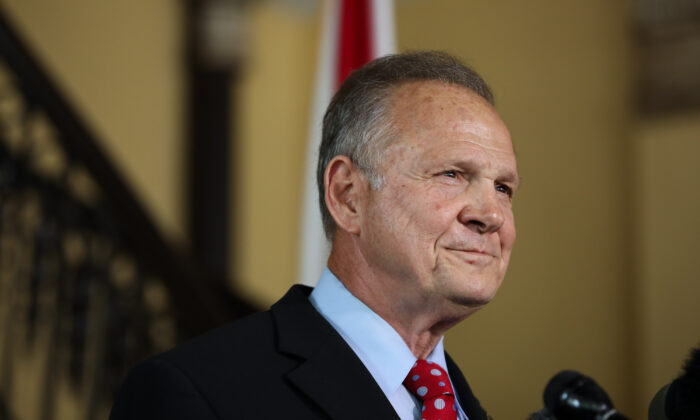 A federal jury has found that a Democratic super political action committee (PAC) defamed Roy Moore, a former chief justice of the Alabama Supreme Court and U.S. Senate candidate, in a television ad during his failed 2017 U.S. Senate bid in Alabama.

The Senate Majority PAC made a false statement about Moore that was defamatory, the verdict, returned on Aug. 12, states. The PAC also published the statement despite knowing it was false or acting “with reckless regard” as to whether the statement was false, the jury said.

“I feel this is vindication and I give thanks to Almighty God and the jurors in this case for a great victory over our corrupt political system,” Moore said in a statement.

A lawyer representing the PAC didn’t immediately respond to a request for comment.

Ahead of the general election, a group linked to the Senate Majority PAC ran a 30-second advertisement nearly 1,000 times on television networks in Alabama that accused Moore of “soliciting sex from young girls” at a mall, according to the complaint. The claim was based on a report from The New American Journal, which cited anonymous sources and later said was inaccurately reported.

The ad also included quotes from news articles, such as “one he approached ‘was 14 and working as Santa’s helper.’” But those articles were not talking about soliciting sex.

The juxtaposition of the quotes were meant “to create the false impression that Judge Moore solicited sex from a 14-year-old Santa’s helper at the mall. The very source they cite in the ad refutes that statement,” the complaint stated.

The Senate Majority PAC said the accusations were baseless but U.S. District Judge Corey Maze, a Trump appointee, rejected multiple attempts to throw out the case, leading to the trial.

Moore lost the campaign by about 21,000 votes to Doug Jones.

Jones ran for a full term in office in 2020. Moore, Sessions, and former college football coach Tommy Tuberville were among the Republicans vying to face him.

Moore received the fourth-most votes in the Republican primary, which Tuberville won.

The other U.S. Senate seat representing Alabama is up for grabs in the upcoming midterm elections.

Correction: Moore was incorrectly stated as a former sheriff. The Epoch Times regrets the error.