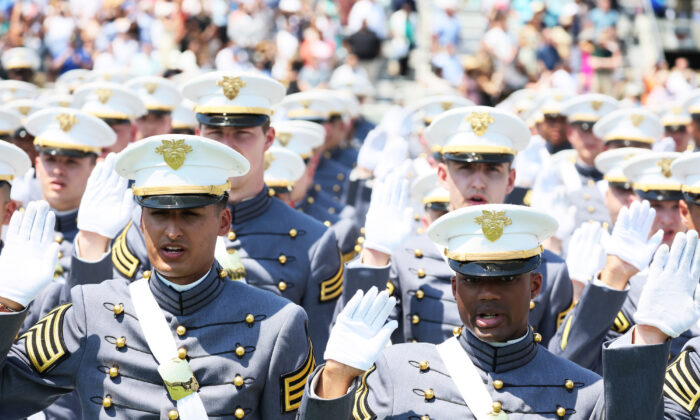 Judicial Watch Uncovers Records of CRT Being Taught to West Point Cadets: ‘An Attack From Within’

Cadets at the United States Military Academy at West Point have been taught to analyze society through the Marxist lens of critical race theory (CRT), according to documents released Monday by Judicial Watch.

The more than 600 pages of records, which include presentation slides about CRT, “whiteness,” and “queer theory” were only given to Judicial Watch after the watchdog group sued the U.S. Department of Defense.

One presentation that discusses “whiteness” states that it’s “first necessary to address whiteness” and the “take-for-grantedness of whiteness” before one can understand “racial inequality and slavery.”

It moves on to describe “whiteness” as “a location of structural advantage, of race privilege” and “a standpoint or place from which white people look at themselves and the rest of society,” and “a set of cultural practices that are usually unmarked and unnamed.”

Several of these slides encourage students to view society from a critical race perspective, asking them how the CRT framework can be applied to address social issues.

“What is the difference between desegregation versus integration?” one slide asks. “How would you apply a tenant of CRT to this idea?”

“What is educational sovereignty?” another slide asks, referring to the idea of indigenous people rejecting education aimed at ensuring their assimilation into the dominant culture. “How does it relate to CRT?”

Another slide addresses affirmative action and asks, “Do you think Affirmative Action creates an environment for ‘reverse discrimination?’ Use CRT to support your answer.”

One of the documents explains that the course is meant to help West Point cadets “lead more effectively” by familiarizing them with “difficult topics.”

“Regardless of personal views, future leaders need to understand arguments on controversial issues and need to be prepared to thoughtfully answer questions when Soldiers ask about topics in the news, such as Critical Race Theory,” the document reads, noting that cadets taking the two-lesson course will learn about “both CRT and criticisms of it as a theory.”

“Debated topics (e.g. controversial Supreme Court decisions, communism, radicalization) are often discussed in the classroom,” it adds. “These discussions are respectful of cadet opinions and foster a deeper understanding of current issues; the ability to engage in such discussion often results in tremendous personal and intellectual growth for cadets.”

“Our military is under attack—from within,” Fitton said in a press release. “These documents show racist, anti-American CRT propaganda is being used to try to radicalize our rising generation of Army leadership at West Point.”

“I was provided a presentation slide from one of the workshops with the title of ‘White Power at West Point’ and ‘Racist Dog Whistles at West Point,'” Waltz wrote in an April 8 letter to Williams. “Additionally, another presentation slide shared with me depicted a lecture by Dr. Carol Anderson of Emory University with the title “Understanding Whiteness and White Rage.”

None of the three said presentations were among materials released by Judicial Watch.

The Defense Department didn’t immediately respond to a request for comments.