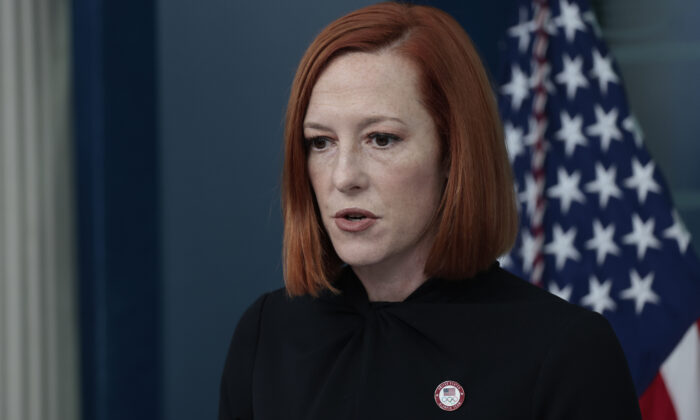 In October, Doughty ordered Psaki and other former and current Biden administration officials to answer questions under oath because evidence has been put forth indicating they colluded with big tech firms to censor users.

Plaintiffs in the case said that Psaki’s public statements about the administration pressuring Facebook and other companies to crack down on supposed disinformation and misinformation and to ban users showed she had personal knowledge about communications between officials and big tech executives. Doughty agreed, finding the plaintiffs “have proven that Jennifer Psaki has personal knowledge about the issue concerning censorship across social media as it related to COVID-19 and ancillary issues of COVID-19.”

He also said that “any burden on Psaki is outweighed by the need to determine whether free speech has been suppressed.”

Psaki sought to quash the subpoena, saying it would unduly burden her because she would need to spend several days preparing for and participating in the deposition.

Psaki filed the motion in federal court in Virginia, where she lives. Doughty is based in Louisiana.

U.S. Magistrate Judge Ivan Davis of Virginia turned down Psaki’s request during a Nov. 18 hearing and transferred the motion to Doughty.

Government lawyers then asked Doughty to quickly rule on the motion and, if he ruled against it, to stay the ruling while they appealed the ruling.

In the new order, Doughty rejected the motion and the attempt to stay it.

Doughty noted that he already acknowledged sitting for depositions would burden officials but pointed to federal rules that say people fighting subpoenas must prove an “undue burden,” not just a burden.

“Preparing for and giving a deposition is part of the normal process for every person subpoenaed for a deposition. It is not an undue burden,” he added.

Psaki had said in a declaration: “Sitting for a deposition in this matter would be extremely burdensome for me. Among other things, I understand that I would need to devote several days to preparing for the deposition, as well as attending the deposition itself, and that would be highly disruptive to both my work and my family.”

Plaintiffs, including Republican Missouri Attorney General Eric Schmitt and Republican Louisiana Attorney General Jeff Landry, had said that Psaki’s motion should be rejected because her statements “only express the strongly-held desire by all deponents that they would rather be somewhere else.” Plaintiffs said they had already moved the deposition twice in an attempt to accommodate Psaki, minimizing any “logistical burden.”

The motion for a stay, meanwhile, stated that if Doughty rejected Psaki’s efforts, he should stay the order until an appeals court hands down its ruling on the matter.

“Subjecting a high-ranking official to a deposition, which cannot later be reversed at a later stage of the litigation, establishes irreparable harm,” government lawyers said in a motion that was supported by Psaki.

A stay pending appeal has four factors, including whether an applicant will be irreparably harmed without a stay.

Doughty said that neither Psaki nor the government has shown they will likely succeed in their fight against the subpoena. He also said that because there isn’t an undue burden for Psaki, there is also no irreparable harm. The third factor doesn’t apply because there are no other parties at issue.

The ruling is the latest loss for the government, which has been trying to shield various former and current officials from answering questions under oath.

Doughty recently denied a motion to quash the subpoena for Elvin Chan, an FBI agent based in California who has been described as being involved in communications that led to Facebook suppressing the original Hunter Biden laptop story.

Doughty also turned down a request for a stay pending appeal of depositions of Surgeon General Vivek Murthy, a Biden appointee; Cybersecurity and Infrastructure Security Agency Director Jen Easterly, a Biden appointee; and Rob Flaherty, a deputy assistant to the president.

The government had said all three are high-ranking officials and that an appeals court will likely side with the defendants. Doughty said he assumed all three are high ranking but reiterated his original finding, which was that the burdens of sitting for depositions were outweighed “by the need to determine whether First Amendment free speech rights are being suppressed.”