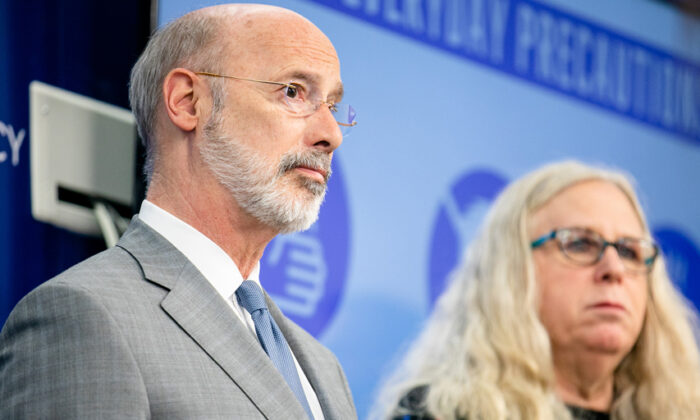 Pennsylvania Gov. Tom Wolf (L) and Secretary of Health Dr. Rachel Levine, in this file photo. (Office of the Governor)
US News

A federal judge has struck down Pennsylvania Gov. Tom Wolf’s CCP virus restrictions that required people to stay at home, put limits on gatherings, and ordered “non-life-sustaining” businesses to stay shut down.

The judge, who was appointed by President Donald Trump, argued that the actions taken by Wolf and Pennsylvania Secretary of Health Rachel Levine, who are both Democrats, “were undertaken with the good intention of addressing a public health emergency,” but that “even in an emergency, the authority of government is not unfettered.”

“The liberties protected by the Constitution are not fair-weather freedoms—in place when times are good but able to be cast aside in times of trouble,” Stickman said. “There is no question that this country has faced, and will face, emergencies of every sort.”

Stickman added that the solution to the crisis “can never be permitted to supersede the commitment to individual liberty that stands as the foundation of the American experiment.”

Furthermore, he said, the Constitution “cannot accept the concept of a ‘new normal’ where the basic liberties of the people can be subordinated to open-ended emergency mitigation measures.”

Wolf has lifted a number of restrictions since the lawsuit was filed several months ago, allowing businesses to open again and canceling the statewide stay-at-home order. Pennsylvania also has a gathering limit of 25 people for events indoors and 250 for events outside.

Pennsylvania has reported that more than 145,000 people have contracted the CCP (Chinese Communist Party) virus since the beginning of the pandemic, while more than 7,800 have died.

Wolf’s spokesperson told The Associated Press that his office is reviewing the judge’s decision.

“It’s a complete and total victory for the counties, the businesses and the representatives,” said attorney Thomas W. King III, who represented the plaintiffs, as reported by Triblive. “You can’t order the entire population of Pennsylvania to stay at home.”