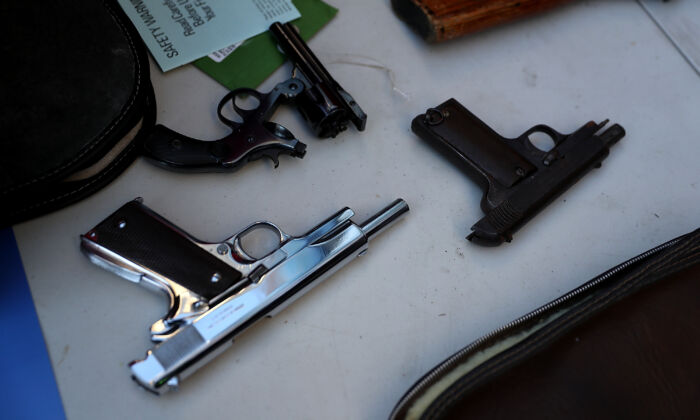 A judge has ruled that a federal law banning guns that have had their serial numbers removed is unconstitutional.

Serial numbers were first required by the federal Gun Control Act of 1968 to allow guns to be traced. They were adopted in an effort to prevent illegal gun sales.

The decision comes in a criminal case involving an Ohio man, Randy Price, whose gun that had its serial number removed was found in his car at a traffic stop in Charleston. He was charged with illegally possessing a gun without a serial number, and also with illegally possessing a gun as a felon. Price had previously been convicted of involuntary manslaughter and aggravated robbery. Goodwin dismissed the former charge, but left in place the latter.

Price argued that the law banning possession of a gun without a serial number is unconstitutional and cited a landmark ruling (pdf) by the U.S. Supreme Court in June this year, New York State Rifle & Pistol Association v. Bruen. The ruling stated that the government cannot restrict Americans’ constitutional right to carry firearms in public for self defense, unless the restriction is “consistent with this Nation’s historical tradition of firearm regulation.”

“Only if a firearm regulation is consistent with this Nation’s historical tradition may a court conclude that the individual’s conduct falls outside the Second Amendment’s ‘unqualified command,’” Thomas wrote.

Goodwin, a nominee of President Bill Clinton, found in his decision that the federal ban on guns with removed serial numbers is not consistent with the United States’ “historical tradition of firearm regulation.”

He noted that a firearm without a serial number was not considered more dangerous compared to other firearms in 1791, when the Second Amendment was adopted. At the time, “serial numbers were not required, or even in common use,” he said, adding that the serial numbers “arose only with the advent of the mass production of firearms,” putting it outside of the “historical tradition of firearm regulation.”

“Any modern regulation that does not comport with the historical understanding of the right is to be deemed unconstitutional, regardless of how desirable or important that regulation may be in our modern society,” Goodwin said in his decision.

“While I recognize there is an argument … that firearms with an obliterated serial number are likely to be used in violent crime and therefore a prohibition on their possession is desirable, that argument is the exact type of means-end reasoning the Supreme Court has forbidden me from considering,” he also wrote.

Price’s lawyer, Lex Coleman, called the decision “thoughtful, measured, and accurate.” A spokesperson for the office of U.S. Attorney William Thompson in Charleston, which was prosecuting the case, said the office is “reviewing the ruling and assessing options.”