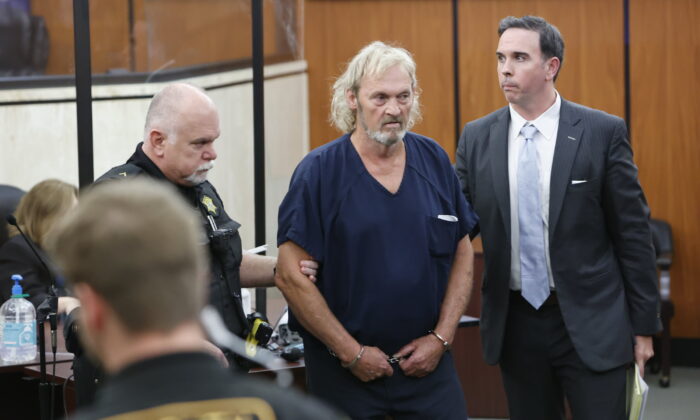 Curtis Edward Smith is escorted out of Richland County Bond court with his attorney, Jarrett Bouchette, in Columbia, S.C., on June, 28, 2022. (Tracy Glantz/The State via AP)
Crime and Incidents

COLUMBIA, S.C.—A judge revoked house arrest Thursday for the man authorities say agreed to kill disgraced South Carolina attorney Alex Murdaugh so he could get a life insurance settlement for Murdaugh’s son but ended up just grazing his head with a bullet.

The decision by Circuit Judge Clifton Newman revoking bond and requiring Curtis “Eddie” Smith to await trial in jail involves a new set of charges linked to Murdaugh—allegations that Smith helped the disbarred attorney with a drug and $2.4 million money laundering ring.

Before Newman even finished announcing his decision, the sound of a deputy clicking handcuffs across Smith’s wrists behind his back could be heard across the courtroom. Smith had walked into the Richland County courthouse a free man through the front door.

An officer escorted Smith, 62, out a protected courtroom side door. He was being taken to the Richland County jail—the same where Murdaugh is awaiting trial without bail on two murder charges in the shooting deaths of his wife and son in June 2021 as well as more than 80 other counts of fraud, stealing money from clients, drug charges and other alleged misdealings.

Newman said he might reconsider granting Smith bond again in the future.

Smith’s bond had been set at $250,000 in June and during that hearing, Smith and his lawyers failed to tell the judge about a nearly $80,000 insurance settlement he received a week earlier—and that he had nearly $60,000 in the bank.

“He said ‘I ain’t got no money.’ He said it twice,” deputy state attorney general Creighton Waters said in court Thursday.

Smith was supposed to be on house arrest, but Waters said GPS records from two weeks of Smith’s monitor showed 26 trips he didn’t have permission to make, including stops at a Walmart and several private homes.

Defense lawyers said many of the trips were from a plant where Smith would collect industrial waste. They said he visited stores to get prescription medicine or supplies for his truck and private homes to work odd jobs or help the father of his girlfriend clear fallen trees. They promised they had a “come to Jesus” discussion about following the judge’s rules.

Smith told the judge he wasn’t intentionally trying to break his bond rules and said he didn’t have the money because he thought he was being asked what happened to the $2.4 million authorities said Murdaugh gave him to launder the money.

“In no way did I ever have any intention to thumb my nose at the court,” Smith said.

Newman spent less than a minute explaining his reasoning to send Smith to jail to await trial.

“Mr. Smith has also willfully violated the house arrest condition of his bond,” Newman said. “”His bond is revoked. He is put back in jail.”

A deputy was already pulling Smith’s wrists behind his back.

Smith met Murdaugh when he hired the lawyer to handle a lawsuit over a work injury. Prosecutors said Smith started cashing checks to hide Murdaugh’s theft of money from clients—at least 437 of them worth $2.4 million over eight years. Many of the checks were just under the threshold where a bank would have had to report the transaction.

Prosecutors said Murdaugh reached out to Smith in September when he wanted to kill himself but make sure his surviving son got his $10 million life insurance policy. The two met on a lonely Hampton County road and investigators said Smith shot at Murdaugh’s head, but the bullet only grazed him.

Smith has denied all the charges against him. He said he did not try to shoot Murdaugh in the assisted suicide attempt, saying instead the gun fired as he tried to wrestle it out of Murdaugh’s hands. Murdaugh first told police someone shot at him as he tried to change a flat tire before revealing the insurance plan, authorities said.

Murdaugh’s lawyers want him to stand trial within six months on charges he killed his wife Maggie, 52, and their younger son Paul, 22, at the family’s Colleton County home. Both victims were found shot to death with different weapons. Alex Murdaugh, 54, was charged last month—13 months after the killings.

The June 2021 deaths prompted authorities to look into all corners of Murdaugh’s life. He is charged with stealing $8.5 million from people who hired him as an attorney.

Murdaugh’s family dominated the legal scene in tiny Hampton County in the southern part of South Carolina for nearly a century. Murdaugh’s father, grandfather and great-grandfather were the area’s elected prosecutors for 87 years straight. Murdaugh once worked for the century-old, family-founded law firm, which said in September that he was stealing money.