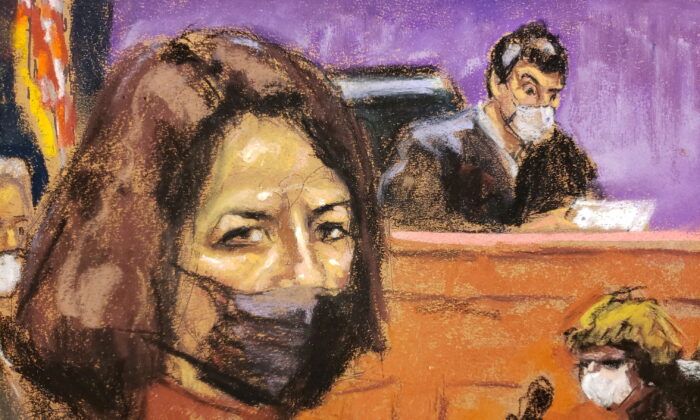 Jeffrey Epstein associate Ghislaine Maxwell as the guilty verdict in her sex abuse trial is read in a courtroom sketch in New York City on Dec. 29, 2021. (Jane Rosenberg/Reuters)
US News

Onetime Jeffrey Epstein girlfriend Ghislaine Maxwell, who was convicted in late 2021 on sex trafficking charges, including sex trafficking of minors, saw her bid for a new trial turned down on April 1.

Weeks after the trial, Maxwell, 60, asked for a retrial, pointing to a juror who revealed after the trial that he was sexually abused when he was a child and informed fellow jurors of the fact.

The juror, known as Juror No. 50 and was later granted immunity, “provided inaccurate information during jury selection,” Maxwell’s lawyers said in a motion in January, adding that the defendant “contends the juror’s presence on the jury violated her Sixth Amendment right to an impartial jury.”

In a more recent filing, Maxwell also noted that Juror No. 50 said in interviews that another juror also disclosed that he or she had been sexually abused as a child.

Prosecutors opposed the move for a new trial, asserting that defendants are “entitled to a fair trial but not a perfect one, for there are no perfect trials,” quoting from a 1984 ruling. They said Juror No. 50 repeatedly told the court before the trial he could be fair and impartial and noted that he maintains this position in his post-verdict interviews, while alleging he believes he answered the juror questionnaire honestly.

Maxwell has not established that the juror deliberately lied about his history, the government said. The record actually indicates he did not, since he revealed the childhood abuse after the verdict.

While the juror “failed to respond accurately during the jury selection process to a question on a written questionnaire about his history of sexual abuse,” Nathan wrote in her ruling, the defense did not prove the court would have struck him “due to actual, implied, or inferred bias.”

During a recent hearing, the juror “testified credibly,” added Nathan, who found “his tone, demeanor, and responsiveness gave no indication of false testimony.” Further, questions probing his possible bias indicated he wouldn’t have been sent home due to his history.

“The requirements for a new trial under McDonough are not satisfied,” Nathan ruled, referring to McDonough Power Equip., Inc. v. Greenwood.