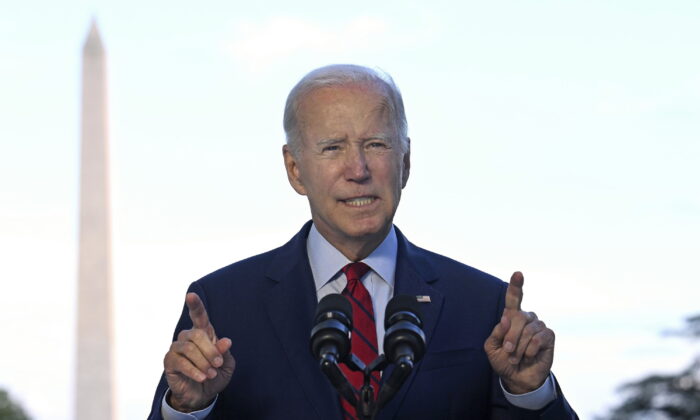 President Joe Biden speaks from the Blue Room Balcony of the White House on Aug. 1, 2022. (Jim Watson/Pool via AP)
Energy

A federal judge issued a permanent injunction on Aug. 18 against the Biden administration’s pause of new oil and gas leasing in federal lands.

The injunction applies to the 13 states that sued the Biden administration over the moratorium in March 2021, including Alabama, Alaska, Arkansas, Georgia, Louisiana, Mississippi, Missouri, Montana, Nebraska, Oklahoma, Texas, Utah, and West Virginia.

Terry Doughty, U.S. district judge for the Western District of Louisiana, ruled that the White House overreached with the ban.

Doughty issued a temporary injunction in the case in June. The injunction was overthrown by the 5th U.S. Circuit Court of Appeals on Aug. 17.

Interior Department and the White House officials didn’t respond to requests for comments by press time.

“President Biden’s executive order to choke off energy development didn’t just increase prices and hurt American families—it was flatly illegal. This decision is a victory for the rule of law and the workers and the rural communities who depend on the energy industry,” he said in a statement.

An ongoing lease moratorium would have lowered employment by 210 jobs, reduced personal income by $13 million, and cost $4 million in oil and gas taxes in Montana in 2021, he said, citing a December 2020 study conducted by the University of Wyoming.

Days before the permanent injunction, a lease known as Lease Sale 257, which is also under dispute in the multiple-state lawsuit, was revived by Biden through the so-called Inflation Reduction Act.

The Inflation Reduction Act includes provisions that direct spending, tax credits, and loans to bolster technologies such as solar panels and equipment to cut pollution at coal- and gas-powered power plants.

But the legislation also contains a provision that reinstates the previously halted Lease Sale 257, which was sold at auction for $192 million in March 2019, the biggest offshore oil and gas lease in U.S. history, spanning nearly 81 million acres in the Gulf of Mexico.

The Bureau of Ocean Energy Management indicated its intention to rescind the lease sale in February 2021, citing Executive Order 14008. The lease sale was later revived by the government. However, it was then challenged by environmental activist groups and halted by Judge Rudolph Contreras of the U.S. District Court of the District of Columbia.

Contreras ruled in January that the decision to proceed with the lease sale was “arbitrary and capricious.”