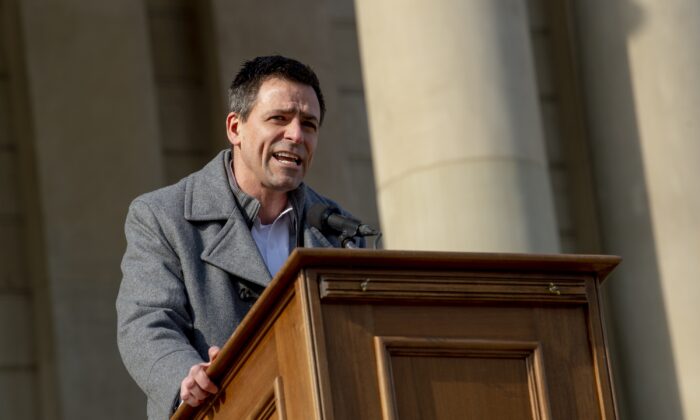 Michigan Republican candidate for governor Ryan Kelley will have to surrender his guns while he awaits trial on misdemeanor criminal charges in connection with the Jan. 6, 2021, U.S. Capitol breach, a judge ruled on June 16.

U.S. Magistrate Judge Robin Meriweather made the ruling even as Kelley’s attorney argued he needs to carry a concealed weapon for self-defense as he makes campaign appearances in Michigan, local media reported. The judge also said Kelley can’t leave the state while awaiting trial and must surrender his passport.

Kelley is “a bit of a high-profile candidate in Michigan” as recent polls showed that he was the front-runner among GOP gubernatorial candidates, his lawyer, Gary Springstead, said. Kelley, who has a license to carry a concealed weapon, “asked that he be permitted to carry his firearm for his own self-defense, during the campaign,” Springstead added.

About a week ago, Kelley was arrested in Michigan and charged with participating in the Jan. 6 breach of the Capitol, federal prosecutors said in a court filing in U.S. District Court for the District of Columbia.

The complaint noted that Kelley didn’t actually enter the Capitol building on Jan. 6, and instead is being charged with entering and remaining within a “restricted building or grounds without lawful authority,” disorderly conduct in a restricted building or grounds, knowingly engaging in an act of physical violence against a person or property on restricted grounds, and willfully injuring or committing any depredation against any property of the United States government.

“The whole thing with Jan. 6, it’s another Democrat show trying to do power control,” Kelley said at an event last week, MLive reported. “They obviously have no real solutions. Look at the price of gas, look at the price of food; we have baby formula shortages.”

Michigan Republican Party co-Chairs Ron Weiser and Meshawn Maddock said that Kelley’s arrest is proof that top Democrats are “weaponizing our justice system” to obtain their political goals. Other GOP gubernatorial candidates spoke out about the arrest, echoing Weiser’s and Maddock’s concerns.

Meanwhile, some analysts suggest that Kelley’s arrest could actually benefit his campaign. Adolph Mongo, a political consultant who worked for former Democratic Detroit Mayor Kwame Kilpatrick while the mayor was under federal investigation, said Kelley should run with the misdemeanor charges.

“I would say lean into it,” Mongo told MLive. “Don’t go into hiding, go out on the campaign trail. He can raise a lot of money.”