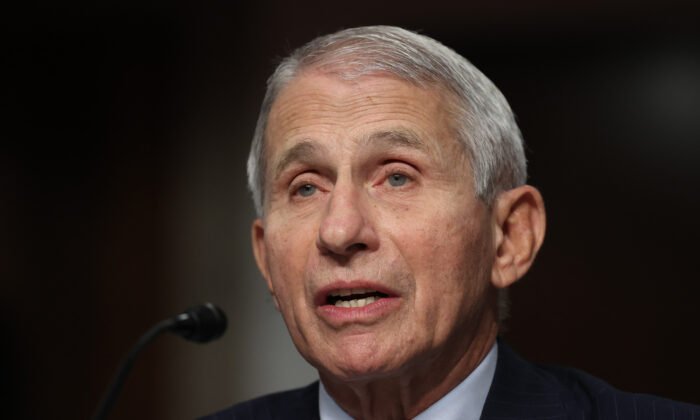 National Institute of Allergy and Infectious Diseases Director Anthony Fauci testifies before the Senate Health, Education, Labor, and Pensions Committee about the ongoing response to the COVID-19 pandemic in the Dirksen Senate Office Building on Capitol Hill in Washington on Nov. 4, 2021. (Chip Somodevilla/Getty Images)
By Zachary Stieber

Dr. Anthony Fauci, White House press secretary Karine Jean-Pierre, and other top Biden administration officials who were resisting efforts to obtain their communications with Big Tech companies must hand over the records, a federal judge ruled on Sept. 6.

U.S. District Judge Terry Doughty, a Trump appointee, ordered the government to quickly produce documents after it was sued by the attorneys general of Louisiana and Missouri over alleged collusion with Big Tech firms such as Facebook. The initial tranche of discovery, released on Aug. 31, revealed that more than 50 government officials across a dozen agencies were involved in applying pressure to social media companies to censor users.

But some of the officials refused to provide any answers or answer all questions posed by the plaintiffs. Among them: Fauci, who serves as director of the National Institute of Allergy and Infectious Diseases (NIAID) and chief medical adviser to President Joe Biden.

The government claimed that Fauci shouldn’t be required to answer all questions or provide records in his capacity as NIAID director or in his capacity as Biden’s chief medical adviser. It also attempted to withhold records and responses from Jean-Pierre.

In the new ruling on Sept. 6 breaking the stalemate, Doughty said both Fauci and Jean-Pierre needed to comply with the interrogatories and record requests.

“First, the requested information is obviously very relevant to Plaintiffs’ claims. Dr. Fauci’s communications would be relevant to Plaintiffs’ allegations in reference to alleged suppression of speech relating to the lab-leak theory of COVID-19’s origin, and to alleged suppression of speech about the efficiency of masks and COVID-19 lockdowns. Jean-Pierre’s communications as White House Press Secretary could be relevant to all of Plaintiffs’ examples,” Doughty said, referring to examples such as the suppression of the Hunter Biden laptop story ahead of the 2020 presidential election and censorship of claims COVID-19 originated in a Chinese laboratory.

Doughty ordered Fauci and Jean-Pierre to comply within 21 days.

Fauci, additionally, must provide complete answers to questions regarding his role as NIAID director.

“We know from the previous round of discovery that efforts to censor the speech of those who disagree with the government on covid policy have come from the top. Americans deserve to know Anthony Fauci’s participation in this enterprise, especially since he has publicly demanded that specific individuals, including two of our clients, Jay Bhattacharya and Martin Kulldorff, be censored on social media,” Jenin Younes, litigation counsel for the New Civil Liberties Alliance and a lawyer for some of the plaintiffs, said in a statement.

“It is time for Dr. Fauci to answer for his flagrant disregard for Americans’ constitutional rights and civil liberties.”

The Department of Health and Human Services (HHS), the parent agency of NIAID, also tried to avoid giving answers or documents in the legal battle, even though discovery from Big Tech companies revealed key HHS officials as participating in what plaintiffs have described as a “censorship enterprise.”

Both HHS and the Department of Homeland Security objected to attempts to get the agencies to search widely for relevant records, describing the attempts as “unduly burdensome and disproportionate to the needs of the case.” HHS identified NIAID, the Centers for Disease Control and Prevention, and the Office of the Surgeon General as three subagencies that would likely have the records sought.

Plaintiffs said that HHS was effectively exempting itself from the discovery process.

Doughty agreed with HHS that conducting a search for relevant records among all 80,000 HHS employees would be overly burdensome, but said the HHS employees identified in documents from Meta, Facebook’s parent company, as engaging with the company needed to respond to the discovery requests.

He ordered the HHS officials, including the HHS deputy digital director, to provide responses within 21 days.

Government officials identified 45 officials across five agencies as officials who communicate with social media companies about misinformation and censorship. But emails and other documents provided by Meta, Twitter, and Google in the case show a number of other officials, including officials at other agencies and the White House, were involved in the effort.

Further, Meta CEO Mark Zuckerberg recently disclosed that the FBI reached out about disinformation before the 2020 election. Soon after that, Facebook suppressed the circulation of the first Hunter Biden laptop story.

“With each of these new revelations, Plaintiffs have approached Defendants and requested that they supplement their discovery responses to include responsive communications from the newly disclosed federal officials. Defendants have refused to do so, on the grounds that none of these newly discovered officials have been sued or served with discovery as yet, and that it would be unduly burdensome to identify and produce their communications,” the plaintiffs said in a recent filing.

The plaintiffs asked to file an amended complaint naming all of the identified officials as defendants to address the issues.

They said the amended filing would enable the serving of requests for records and information to each of the officials who were not initially disclosed by the government.

Doughty said that plaintiffs could file within 30 days an amended complaint adding additional agencies and individuals.