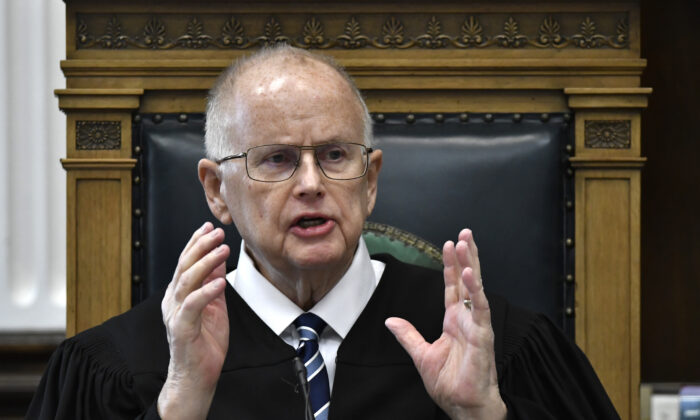 Circuit Court Judge Bruce Schroeder addresses the jury pool at the start of jury selection on the first day of trial for Kyle Rittenhouse in Kenosha, Wis., on Nov. 1, 2021. (Sean Krajacic/The Kenosha News via AP)
Judiciary

The judge at Kyle Rittenhouse’s trial said Wednesday that he will “think long and hard” about allowing live-streamed trials in the future and criticized the media for “grossly irresponsible handling” of the trial.

Judge Bruce Schroeder responded to a report published by the Milwaukee Journal-Sentinel that included questions about why he didn’t take action after Rittenhouse’s lawyers filed a motion to dismiss the trial with prejudice earlier this week.

Noting that the motion was filed Tuesday, the judge said he hasn’t “had a chance” to read it.

“I really think before I rule on a motion, I should let the state respond,” Schroeder said, referring to the prosecutors. “So why anyone would think, it is odd for the judge to sit on a motion to dismiss, I have no idea. And the recommended course, I think for judges, at least that is what I was educated to believe, was that motions to dismiss should be kept under advisement … unless they’re crystal clear and they have had a chance for both parties to respond.”

But neither the prosecutors, defense attorneys, or Schroeder had the chance to address it due to the “heat of the discussion on the day the original oral motion was made,” the judge said.

Rittenhouse’s attorneys argued that the trial should be dismissed with prejudice because prosecutors did not turn over the full drone video until after the evidence was closed. They also argued that prosecutor Thomas Binger’s line of questioning during his cross-examination of Rittenhouse last week violated the defendant’s Fifth Amendment right to remain silent.

Schroeder also was questioned by media outlets on his decision Tuesday to allow Rittenhouse himself to reach into a raffle drum and draw numbered slips for the jurors who would be selected in the case to deliberate and who would be dismissed as alternates.

While noting that most courts use a clerk to perform that function, Schroeder explained that he’s been having defendants pull slips for 20 years.

“I would admit that there are not a large number of courts that do that, maybe not any,” Schroeder said Wednesday.

Rittenhouse, 18, faces life in prison if convicted on the most serious charge for using a rifle to kill two men and injuring a third during a night of protests, riots, arson, and vandalism in Kenosha, Wisconsin, on the night of Aug. 25, 2020.

Rittenhouse, who has pleaded not guilty, testified last week that acted in self-defense, while prosecutors claimed he provoked the violence.