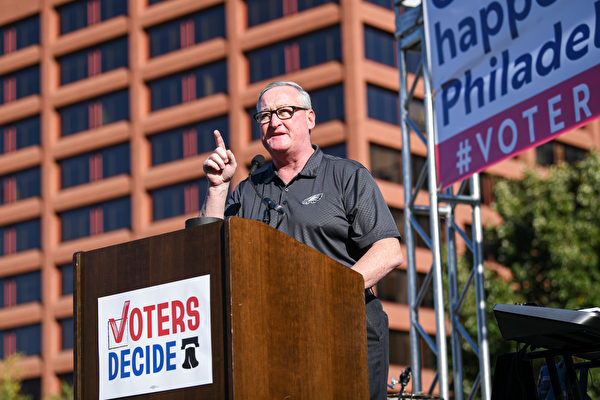 Philadelphia Mayor Jim Kenney speaks during the Count Every Vote Rally In Philadelphia at Independence Hall in Philadelphia, Penn., on Nov. 7, 2020. (Bryan Bedder/Getty Images for MoveOn)
By Katabella Roberts

A Philadelphia judge on Monday blocked the city from banning guns at parks and recreation facilities after a gun rights lobbying group argued that the city does not have authority to do so.

Judge Joshua H. Roberts of the Philadelphia Court of Common Pleas issued a permanent injunction (pdf) against the ban and permanently enjoined the city against enforcing the directive.

The executive order stated that since 2019, nearly 300 reported shooting incidents have occurred at city recreation facilities, in addition to dozens of other incidents of violence with a deadly weapon.

It also cited the Sept. 9 death of Tiffany Fletcher, an employee of the Mill Creek Recreation Center in West Philadelphia. Fletcher was shot and killed while working, the order said.

The order went into effect immediately and prohibited anyone carrying a firearm from entering any indoor or outdoor facility operated by the city’s Department of Parks and Recreation.

Such places include recreational centers, ballfields, courts, pools, and playgrounds but excluded park trails and “passive park space,” according to the order.

It allowed for individuals carrying guns in such places to be treated as trespassers if they refused to leave.

Less than 24 hours after signing the order, Gun Owners of America (GOA), a nonprofit organization aimed at protecting the right to keep and bear arms, filed suit against the order in state court.

GOA argued in a complaint (pdf) that the mayor’s order “directly violates Pennsylvania law, and may not be enforced” because the Preemption Statute expressly prohibits any county, municipality, or township from passing gun-control measures.

“Pennsylvania law expressly preempts the Mayor from banning firearms in public recreational facilities. Nonetheless, Mayor Jim Kenney has attempted to do so. He may not. Pennsylvania law is ‘crystal clear’: regulation of firearms is a matter of statewide concern, and must be undertaken by the General Assembly,” they wrote.

Pennsylvania Law states that “no county, municipality or township may in any manner regulate the lawful ownership, possession, transfer or transportation of firearms, ammunition or ammunition components when carried or transported for purposes not prohibited by the laws of this Commonwealth.”

“The law in Pennsylvania couldn’t be clearer,” Andrew Austin, GOA’s attorney in the case, said in a statement following Monday’s ruling. “No municipality–including Philadelphia–may regulate the lawful possession of firearms in any manner. Obviously, the City doesn’t care about that law or the concrete legal precedent affirming it, and since there are no consequences for them, they will continue to try to ram through illegal rules to the detriment of their own citizens. However, we’re grateful that the Philadelphia Court of Common Pleas was willing to act so quickly to prohibit the mayor’s illegal action.”

A spokesperson for Mayor Kenney said the city is “disappointed” by the latest ruling while citing recent shooting incidents at recreation facilities across the city.

“We are reviewing today’s decision and are disappointed by the outcome, which as it stands prevents City employees from making the reasonable request that anyone with a firearm or deadly weapon leave a recreation facility,” Sarah Peterson, Deputy Communications Director for Mayor Kenney, told The Epoch Times in an emailed statement.

“The Mayor’s Executive Order was intended to prevent the senseless violence that is interfering with the safety of children, families, and staff in what must be safe places,” Peterson added.

The City of Philadelphia is expected to appeal the Judge’s order, which GOA said would result in the city continuing to “frivolously waste taxpayer money on their unlawful anti-gun agenda.”

Monday’s ruling comes as the Biden administration has pushed for increased gun control measures and expanded background checks following a string of mass shootings across the country.

Republicans and gun rights advocates have argued that such measures impinge on the Second Amendment rights of law-abiding citizens.

The Epoch Times has contacted Mayor Kenney’s office for comment.