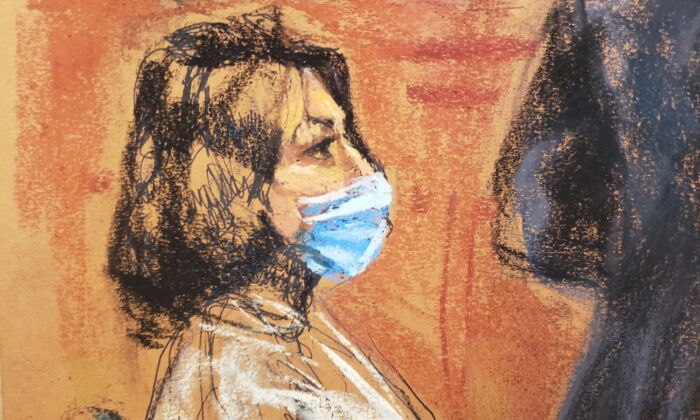 Ghislaine Maxwell, the Epstein associate accused of sex trafficking, watches as Lawrence Visoski, longtime pilot of the late Jeffrey Epstein, is cross examined during her trial in a courtroom sketch in New York City, on Nov. 30, 2021. (Jane Rosenberg/Reuters)
Judiciary

NEW YORK CITY—The judge presiding over the Ghislaine Maxwell sex trafficking trial has asked jurors to continue attending court ahead of the New Years period, expressing concern over the speed of spread of the Omicron coronavirus variant.

Noting the “astronomical spike” in COVID-19 cases, Judge Alison Nathan requested that jurors be available to deliberate on Dec. 30 and 31, which were originally scheduled as days off for New Years. Additionally, the days will run from 9 a.m. to 6 p.m., instead of finishing at 5 p.m.

Nathan noted that the jurors can take as much time as they need to deliver their ruling. She also noted that, if they choose, they can stay later than 6 p.m. going forward.

She said specifically she was “trying to avoid a mistrial due to the Omicron variant.”

The jury is now into their fourth full day of deliberations on the innocence or guilt of Maxwell to six federal counts, including sex trafficking of minors, enticing a minor to travel to engage in illegal sex acts, transporting a minor with the intent to engage in criminal sexual activity, and three counts of conspiracy.

Maxwell faces up to 70 years in prison if convicted on all charges.

The jury’s somewhat convoluted question to the court regarding a specific element of a specific charge against Ghislaine Maxwell was answered by Nathan on Dec. 27 in favor of the prosecution. At the time, Maxwell’s defense team voiced its objection.

In the early morning hours of Dec. 28, the defense sent a followup letter to Nathan on the issue, which saw further debate on the topic in the courtroom at about 10 a.m. EST.

When defense attorney Christian Everdell started his discussion of the topic again, Nathan said he was “seeking a third bite of the apple,” but added, “Go ahead,” and heard the latest version of his argument.

Prosecutor Alison Moe had previously said to Nathan, “The jury has been accurately instructed on the law and that’s all that’s required.”

Nathan stood by her original answer to the question, which was for the jury to follow specific directions written out in their instructions.

There was no new activity until 4:45 p.m. when the jury sent its latest note that read, “Our deliberations are moving along and making progress,” and then requested to be dismissed at 5 p.m.

Nathan brought the jury in and granted their request, while noting the changes in scheduling going ahead.