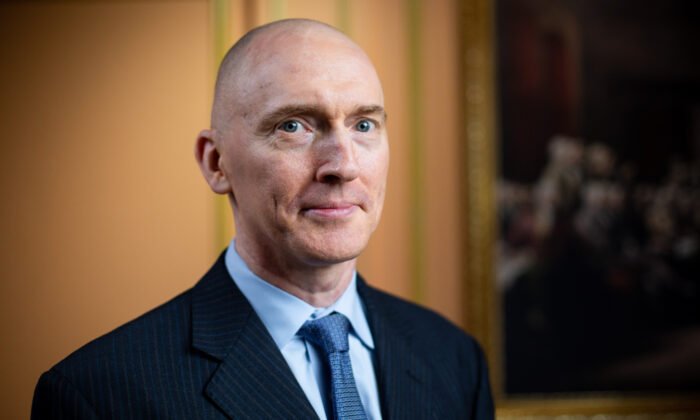 A federal judge has dismissed a lawsuit brought by Carter Page, a former associate of President Donald Trump, over the FBI’s controversial surveillance of him as part of its investigation into the Trump campaign.

U.S. District Judge Dabney Friedrich issued the ruling on Thursday stating that Page, who was an informal presidential campaign adviser to Trump in 2016, cannot sue the FBI or other former officials involved in the $75 million lawsuit (pdf).

Page filed the suit in 2020 against the FBI, the Justice Department, and multiple former FBI officials for damages stemming from what he called the “unlawful spying” against him over the now disproven allegations that the Trump campaign was colluding with Russia.

In the lawsuit, Page accused the federal agencies and ex-officials of violating his constitutional rights and other legal rights by unlawfully surveilling him, noting that the “defendants’ unjustified and illegal actions (including violations of federal criminal law)” had “violated federal statutes enacted to prevent unlawful spying on United States persons, as well as the Constitution.”

Clinesmith pleaded guilty in 2020 to doctoring an email from the CIA to make it appear as if Page was not an agency asset, without disclosing that Page was an approved operational contact for the CIA who reported on his interactions with Russian intelligence officers.

The email was used to obtain spy warrants to surveil Page.

Friedrich noted that the “FBI’s conduct in preparing the FISA warrant applications to electronically surveil Page was deeply troubling” and that the government itself has “conceded that it lacked probable cause for two of the warrants.”

However, Friedrich, a Trump appointee, ruled that the lawsuit be thrown out because Page had “brought no actionable claim against any individual defendant or against the United States.”

“In part, that is because Page faces at least three statutory roadblocks. First, Congress has not created a private right of action against those who prepare false or misleading FISA applications,” the judge wrote, noting that “both the plain language and the structure of FISA make clear that civil liability under 50 U.S.C. § 1810 attaches only to those who conduct or perform electronic surveillance.”

Secondly, the judge noted that Congress has “not provided for damages claims against federal officers for constitutional violations stemming from unlawful electronic surveillance in the national security context,” and thirdly, “Congress has not waived the United States’s sovereign immunity for this kind of claim.”

The FBI obtained warrants under the Foreign Intelligence Surveillance Act (FISA) to electronically surveil Page as part of its investigation into the alleged connection between the Trump campaign and the Russian government. At the time, the FISA warrant application described Page as an agent of Russia, although he was not charged with any crime.

Yet the process of securing the warrants was heavily flawed and inspectors relied in part on the dossier of political opposition research on then-candidate Trump, which was written by former British intelligence officer Christopher Steele.

The research in the dossier, which had been widely discredited, was paid for by the Hillary Clinton campaign and the Democratic National Committee.

A number of the warrants were later declared invalid while officials admitted the spying shouldn’t have been carried out. FBI Director Christopher Wray has since apologized to the Foreign Intelligence Surveillance Court (FISC) for the way it conducted the surveillance of Page.