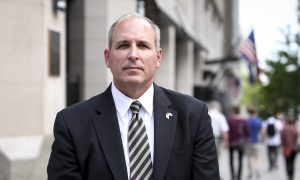 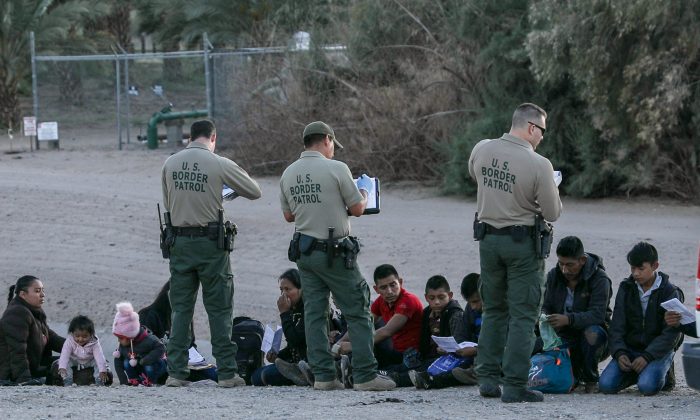 A group of illegal aliens is apprehended by Border Patrol after crossing from Mexico into Yuma, Ariz., on April 12, 2019. (Charlotte Cuthbertson/The Epoch Times)
US News

A San Francisco judge who has given heavily to Democrats issued an order on May 24 that temporarily prevents President Donald Trump from using military funds to pay for construction of a wall on the nation’s porous border with Mexico.

The injunction, nationwide in effect, is part of a growing trend that Attorney General William Barr calls dangerous because it allows a single judge to veto presidential actions. According to the Justice Department, an average of 1.5 such national or universal injunctions were issued each year against the administrations of Presidents Ronald Reagan, Bill Clinton, and George W. Bush. Under President Barack Obama, the average rose to 2.5.

But 37 injunctions have been issued against the Trump administration since the president was inaugurated, Barr said.

The case, along with other legal challenges to the president’s efforts to secure the border, is likely to end up in the Supreme Court eventually.

Gilliam wrote in his 56-page preliminary injunction that “irreparable harm” would ensue if the administration moved forward while the lawsuit brought by the Sierra Club awaited a full hearing on the merits.

“Because the Court has found that Plaintiffs are likely to show that Defendants’ actions exceeded their statutory authority, and that irreparable harm will result from those actions, a preliminary injunction must issue pending a resolution of the merits of the case,” he wrote.

Gilliam also made a claim that legal experts say is highly questionable, falsely accusing Trump of violating the separation of powers doctrine and infringing on Congress’s power of the purse.

“The position that when Congress declines the Executive’s request to appropriate funds, the Executive nonetheless may simply find a way to spend those funds ‘without Congress’ does not square with fundamental separation of powers principles dating back to the earliest days of our Republic,” he wrote.

It’s true that Congress refused to give the president all the funding he requested to construct a border barrier. As Congress denied those appropriations, on Feb. 15, Trump invoked his congressionally approved powers under the National Emergencies Act of 1976, a statute that gave presidents the power to declare emergencies within limited parameters.

Writing in The Hill newspaper a few months ago about Trump’s use of the law, left-leaning constitutional law professor Jonathan Turley stated, “Congress expressly gave presidents the authority to declare such emergencies and act unilaterally.”

The law had been used repeatedly by every president since Gerald Ford with little or no controversy until the current president invoked it. Lawmakers have tried and failed to overturn Trump’s use of the law to secure border wall construction funding.

Trump called upon the statute in mid-February as Congress gave final approval to a $333 billion omnibus spending bill. The legislation provides $1.375 billion for 55 miles of border barriers in Texas, well below the $5.7 billion Trump sought for a border wall and the $25 billion he originally said was needed.

The emergency declaration moved around $6.7 billion in funding that was previously appropriated for other projects, largely for military construction. In his fiscal 2020 budgetary blueprint submitted on March 11 to Congress, the president sought an additional $8.6 billion to build the border wall.

Raising doubts about his impartiality, before Gilliam became a judge, he made large donations to Democrats from 2007 to late 2014, as The Epoch Times has reported.

During his confirmation hearings, Gilliam said judges should be impartial. “I believe that the most important attribute of a judge is the commitment to faithfully and impartially apply the law in every case, without regard to the type of matter or the identity of the parties.”

“Walls divide neighborhoods, worsen dangerous flooding, destroy lands and wildlife, and waste resources that should instead be used on the infrastructure these communities truly need,” she said. “The Sierra Club and our members are thrilled the courts put a rightful check on Trump’s abuse of emergency powers.”