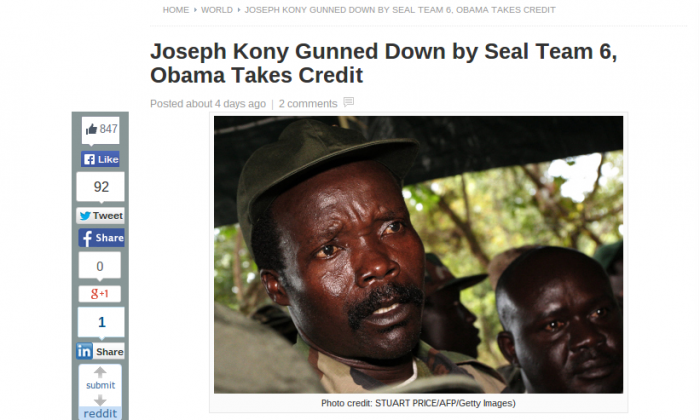 A screenshot of the satire article.
News

Reports of Joseph Kony being dead, killed by Seal Team 6, are false–based on a satire report from a notorious website that’s similar to The Onion.

This website, the National Report, is lesser known so it often fools people with its satire pieces.

This particular piece was published late last week and claimed that President Barack Obama was taking credit for the killing of Kony, which was carried out by Seal Team 6.

It claimed to cite sources at the Pentagon.

It said that the “carefully rehearsed operation” was carried out by about 40 troops around 1:20 a.m. local time.

Some reporters were fooled by the report, such as Danny Gold of Vice News, who tweeted that reports were coming in about Kony’s death.

However, Albanian researcher Ledio Cakaj, who is working on the Lord’s Resistance Army, noted that the story is from a satire website.

“To all Ugandan friends. Article claiming #Kony was killed by US seals is from a satirical website. Not true,” he said via Twitter.

Alan Kasujja of BBC added: “Just asked a very high level source in #Uganda if Joseph #Kony had been killed by Seal Team6 as rumoured. His answer- ‘That’s rubbish.'”