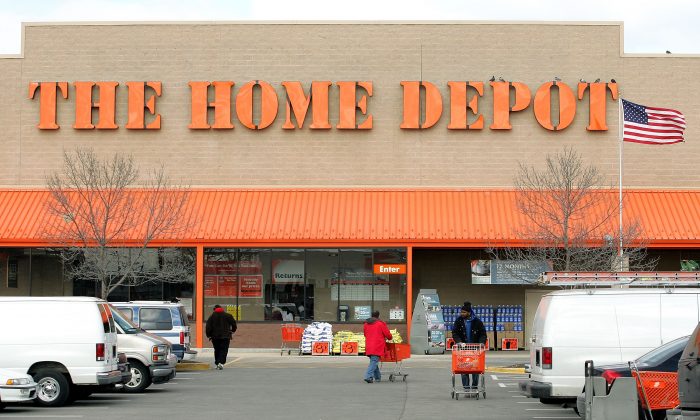 A stock photo of the facade of The Home Depot store is seen on Feb. 17, 2005, in Evanston, Illinois (Tim Boyle/Getty Images)
US News

A humorous bathroom warning was mistaken for a bomb threat at a Home Depot location in Wichita, Kansas, on Feb. 12, according to news reports.

Someone at the store called police after they overhead a customer making an alleged threat in the bathroom.

The man who made the “bomb threat” was actually warning others about the severity of his need to use the restroom, KWCH reported.

“You all need to get out of here because I’m fixin’ to blow it up,” the man said.

“We just had a customer here made what may have been a bomb threat,” said a 911 caller, according to the report.

“He said, uh, somebody told me there’s a bomb in here and you need to leave the building. He said it three times.”

One witness said he laughed at the remark and knew it was bathroom humor, the report said.

According to Kansas.com, a store clerk recognized the man who made the joke, saying he was a “regular customer” before giving his name to police.

The officer got ahold of the man before he told police “that he had no intention of causing such alarm, and that the comment he said … was meant to be funny,” the report said.

A report of a bomb threat at a Home Depot store in Kansas turned out to be a big misunderstanding.

The officer then wrote in a police report that the man had to use the bathroom and “was attempting to provide a polite warning to the other patrons of the bathroom,” Kansas.com reported.

Crime Up in Kansas

A report in August 2018 showed that the murder rate in the state of Kansas is at its highest level since the Kansas Bureau of Investigation began tracking statistics.

There were 176 murders in Kansas that year, according to Kansas.com, adding that homicides were 40.8 percent above the state’s 10-year average. It was up from 148 the previous year.

Violent crimes, which included murder, sexual assault, robbery, and aggravated assault and battery, increased by 23.1 percent over the past three years, said the KBI.

Violent crimes overall, including murder, rape, robbery, and aggravated assault and battery, increased by 23.1 percent in the past three years, according to the KBI report.

Despite the recent spike in gun crime in Atlanta, violent and property crimes have seen a downward trend, according to statistics collected by the FBI. Some areas, however, have significantly deteriorated and others, despite improvements, still need attention.

The violent crime rate—including offenses such as murder, robbery, and aggravated assault—dropped by almost 1 percent and is still about 4 percent above the 2014 rate. The murder rate dropped by 0.7 percent.