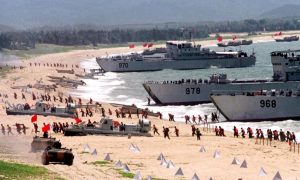 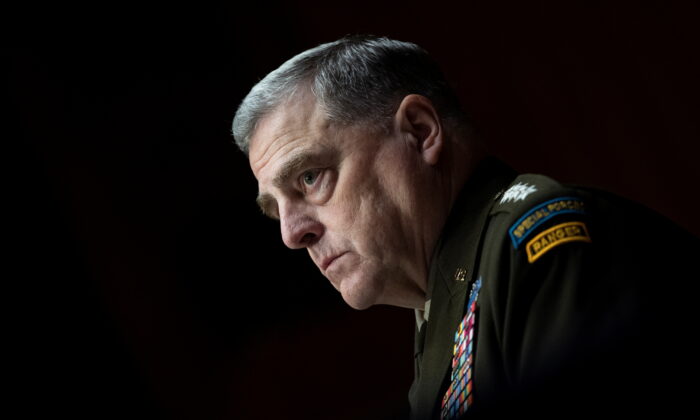 Chairman of the Joint Chiefs of Staff Gen. Mark Milley looks on during a Senate Appropriations Committee hearing in Washington, on June 17, 2021. (Caroline Brehman/Pool via Reuters)
Viewpoints

Joint Chiefs of Staff Chairman Gen. Mark Milley dismissed concerns about neo-Marxist critical race theory. He feigned outrage at accusations the military was becoming “woke.” His cavalier response showed that at best he’s ignorant, and at worst he doesn’t care.

Critical race theory stems from a school of thought among post-Russian Revolution Marxist intellectuals who were disturbed by the fact communist revolution didn’t sweep Europe as Marx predicted. Orthodox Marxists deny that critical race theory is Marxist because it derives from a revisionist strain of thought. The revisionists reimagined Marxist theory to focus on who has power in society and who doesn’t instead of the class struggle between the working class and the capitalists found in Karl Marx’s writings.

Critical race theory’s reliance on Marxist dualism of the oppressor versus the oppressed intends to produce strife and chaos.

Other social-science research finds that diversity training is ineffective at reaching positive outcomes.

“I’ve read Mao Tse Tung. I’ve read Karl Marx. I’ve read Lenin. That doesn’t make me a communist,” Milley said. “So what is wrong with understanding, having some situational understanding about the country for which we are here to defend?”

“And I personally find it offensive that we are accusing the United States military, our general officers, our commissioned, non-commissioned officers of being, quote, woke or something else, because we’re studying some theories that are out there. That was started at Harvard Law School years ago,” Milley continued.

He claimed that he wanted to understand the “White Rage” behind the assault on the Capitol on Jan. 6. The general’s liberal-sounding rhetoric masks the real problem. The concept of “White Rage,” developed by Emory University professor Carol Anderson, is an aspect of critical race theory itself.

Anderson promotes black powerlessness and blames whites for every contemporary problem of black America. She insinuates that questioning the critical race theorists’ dogmas itself is racist in her book “White Rage: The Unspoken Truth of Our Racial Divide.”

“The trigger for white rage, inevitably, is black advancement,” Anderson theorizes, thus setting up a strawman argument that suggests that all white Americans oppose prosperity for blacks and that it threatens them.

Her book cherry-picks points about white Americans following the Civil War. It avoids discussion of how people such as General and later President Ulysses S. Grant and the U.S. Army fought to protect freed blacks from racist violence. She also glosses over how Republicans tried to protect black civil rights from racist oppression immediately following the Civil War (pdf), focusing instead on President Andrew Johnson’s racism. Doing so is needed to portray America as totally evil. Such omissions show that Anderson’s “White Rage” is propaganda, not scholarship.

Are Grant’s exploits on behalf of black Americans discussed, or the role of the U.S. military during Reconstruction protecting black lives (pdf) talked about in the Defense Department’s seminars?

Milley’s discussion of his having read Mao, Marx, and Lenin was a red herring about the question at hand. Namely, are U.S. servicemembers being indoctrinated in ideas developed by contemporary acolytes of Karl Marx? Marxist thought is particularly destructive because it’s predicated on dialectical thinking that promotes conflict to bring about a new society.

Milley’s dismissal set up a strawman argument because critical race theory is not a dispassionate examination of the history of slavery, Jim Crow, or even the problems black Americans currently face in American society. And by all reports, this critical race theory is being taught as fact rather than as a dispassionate assessment of the sectarian opinions of neo-Marxist scholars without presenting contrary ideas for debate. They aim to discredit the United States, its Constitution, and the same institutions that members of the military swear an oath to protect.

“What Gen. Milley was responding to was an exchange that I had had during my time of question-and-answer with Secretary Austin, where I raised the point of a series of courses and seminars that’s being taught at West Point, which was brought to my attention by very upset and disturbed cadets, their families, soldiers,” Rep. Michael Waltz (R-Fla.) told Hugh Hewitt on his podcast on June 24. “One of the seminars, Hugh, was titled, ‘Dealing With Your Whiteness and White Rage,’ which apparently over 100 cadets attended; ‘Critical Race Theory: An Introduction’—the textbook is part of the curriculum.”

This was one of several incidents that have appeared since Joe Biden became president.

Members of Congress have repeatedly raised questions about the Navy’s recommendation of neo-Marxist ideologue Ibram X. Kendi’s book “How to Be an Antiracist,” which seeks to remedy past discrimination against blacks with “future discrimination” against whites. Kendi blames capitalism for the lack of an equality of outcome among black Americans. Kendi’s thesis falls apart after you look at how Afro-Cubans live in communist Cuba compared with Cubans of Spanish descent, the former suffering discrimination despite living under socialism.

Like Anderson, Kendi cherry-picks his information and gets facts, such as data about black poverty in the Reagan era and other topics that are more nuanced than he claims, wrong.

American capitalism has spawned more innovations and technological achievements than any in the preceding millennia of human history, including the technology that you’re reading this article on. Poor Americans of all colors have a higher standard of living here than they do in any socialist country, including China.

“Sir, initially you mentioned critical race theory: I’m not a theorist; I’m the Chief of Naval Operations,” Gilday told Congress. “What I can tell you is, factually, based on a substantial amount of time talking to sailors in the fleet, there’s racism in the Navy, just like there’s racism in our country. And the way we’re going to get after it is to be honest about it, not to sweep it under the rug, and to talk about it—and that’s what we’re doing. And that’s one of the reasons that book is on the list.”

Winning wars requires unit cohesion and a common mission. It seems that Gen. Milley, Adm. Gilday, and the Pentagon’s civilian leadership are determined to compromise unit cohesion at the time when threats from Russia and China are increasing and that cohesion is needed the most. If they examined the social science, they would realize their activities only cause harm.