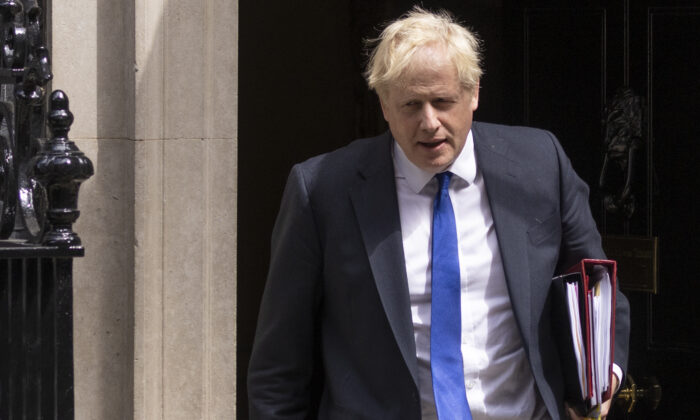 Johnson to Address Nation After Reports He Will Resign

British Prime Minister Boris Johnson will address the nation on Thursday, Downing Street confirmed, amid reports he will resign.

It comes as almost 60 government ministers and ministerial aides quit over Johnson’s handling of sexual misconduct allegations against a former deputy chief whip.

A Downing Street spokesman said Johnson “will make a statement to the country today.”

According to the BBC, citing an unnamed source from Johnson’s office, Johnson has agreed to stand down.

In a statement posted on Twitter on Thursday morning, Chancellor of the Exchequer Nadhim Zahawi said he, alongside other ministers, had “made clear” to Johnson in private on Wednesday that “he should leave with dignity.”

“I am heartbroken that he hasn’t listened and that he is now undermining the incredible achievements of the government at this late hour,” Zahawi’s statement read.

Zahawi said no one would forget “getting Brexit done,” keeping Jeremy Corbyn out of government, the government’s handling of the COVID-19 pandemic, and its support for Ukraine, but “the country deserves a government that is not only stable, but which acts with integrity.”

“Prime Minister, you know in your heart what the right thing to do is, and go now,” the letter concluded.

Donelan was appointed on Wednesday to replace Zahawi as he had been appointed chancellor of the exchequer.

It followed the shock resignations of Health Secretary Sajid Javid and Chancellor of the Exchequer Rishi Sunak on Tuesday evening, which started the snowballing of resignations.

Another Cabinet minister, Levelling Up Secretary Michael Gove, was sacked by Johnson after he reportedly told Johnson to go on Wednesday.

The mass resignation was triggered on Tuesday after Johnson admitted that it was a “mistake” to keep former deputy chief whip Chris Pincher in government roles despite sexual misconduct allegations against him.

Downing Street stated last week that Johnson wasn’t aware of any formal complaints against Pincher, only to admit this week that the prime minister was told about an investigation and had forgotten about it.

Reading a personal statement on his resignation in Parliament on Wednesday, Javid said “enough is enough.”

He also said ministers who didn’t resign “will have their own reasons,” but “it is a choice. … Not doing something is an active decision.”

On Thursday morning, Defence Secretary Ben Wallace wrote on Twitter: “A number of us have an obligation to keep this country safe, no matter who is PM. The Party has a mechanism to change leaders and that is the mechanism which I advise colleagues to use. In the meantime, the public would not forgive us if we left these Offices of State empty.”