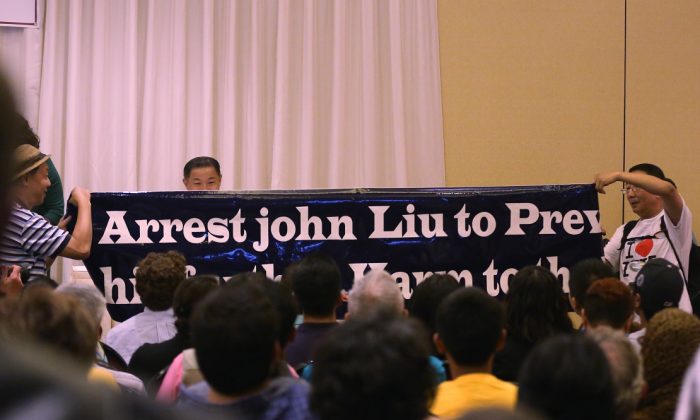 Protesters at the candidate forum, with a banner that reads "“Arrest John Liu to Prevent his further Harm to the U.S.” Liu, a candidate for state senator, was a speaker at the Forum, which took place at the Sheraton Hotel in Flushing, Queens, New York City, on Tuesday, Aug. 19, 2014. (Epoch Times)
China

NEW YORK—Three weeks before he faces incumbent Tony Avella in the Democratic Primary for New York’s 11th state senate district, John Liu was once again haunted by the skeletons in his closet.

At a candidate forum hosted by the MinKwon non-profit, right before he was supposed to deliver a 1-minute and 15-second speech summarizing his platform to a ballroom of concerned citizens, protesters unfurled in front of Liu a banner that read “Arrest John Liu to Prevent his further Harm to the U.S.”

A female protester started lambasting Liu in Mandarin about connections to the Chinese Communist Party, which drew loud, forceful responses from Liu’s supporters in the crowd, creating a brouhaha that lasted over 10 minutes and needed quelling by the hotel’s security guards.

Liu was phlegmatic about the disturbance, sarcastically referring to the protesters as “friends” who had been “following him for years.”

“I’ve been told that they are a part of my friends at the Falun Gong who have been following me for years, mainly because they firmly believe I’m a communist spy from China,” Liu added.

Fu Yuxia, the female protester, later told the Epoch Times that she was there to draw attention to Liu’s ties to the Chinese regime, which she said seized her home in Shanghai in 1997.

Protesters at the candidate forum, with a banner that reads “”Arrest John Liu to Prevent his further Harm to the U.S.” Liu, a candidate for state senator, was a speaker at the Forum, which took place at the Sheraton Hotel in Flushing, Queens, New York City, on Tuesday, Aug. 19, 2014. (Epoch Times)

When asked about Liu’s claims, Yuxia said that she was not associated with Falun Gong.

Liu has a history with the Falun Gong spiritual practice. In 2008, when Liu was a councilman in Queens, Falun Gong practitioners suffered attacks by mobs that, in a taped phone call, the Chinese consulate general took credit for encouraging.

When the Epoch Times asked him a question after the Forum about a fundraiser held for him by a Chinatown organization with known mob ties, he refused to answer, saying that the Times’ question was “predicated on falsehood.”

Epoch Times was the first newspaper to cover problems with the fundraising practices for his campaign for comptroller in 2009.

The New York Times followed up in 2011 with an investigation that found evidence of his campaign running a straw-donor scheme to defraud New York City’s system of public-matching funds.

NYC’s public-matching funds provides candidates with $6 for every $1 they receive in individual donations up to $175. Straw-donors are fake contributors who are reimbursed for donations.

Federal investigators weren’t far behind, and in mid-2013 two of his top campaign aides, including his treasurer, Jenny Hou, were convicted of attempted wire fraud. The NYC Campaign Finance Board chose to deny Liu matching public funds of $3.5 million one month before the city’s mayoral primary in 2013, effectively ending Liu’s campaign.

Liu took shots at the NYC Campaign Finance Board at the Candidate Forum. He called the board’s decision to deny him matching funds in 2013 —funds Liu still claims he was “entitled to”— “outrageous and unfair” and “influenced by politics.”

“We need to make a system that is fully comprehensive and fair in a way that is not subject to the political tides of the day,” said Liu, who also touted his federal lawsuit against the campaign board, where he seeks an unspecified sum in damages.

Liu launched his campaign in May, running as a progressive alternative to Avella, who, as a member of the Independent Democratic Conference (IDC), worked with Republicans to control the state senate.

The ex-comptroller’s campaign has lost traction since June 25, when the IDC leadership agreed to break away from the Republican coalition in the senate and commit to passing select progressive legislation.

Following the IDC concession, Avella has racked up endorsements from key unions, like the Patrolmen’s Benevolent Association and the 1199 SEIU union, which had put its weight behind Liu in his 2009 comptroller race.

Endorsements play a critical role in primaries where low voter-turnout means that a minority of vocal constituents can drive the election.

The Observer quoted an anonymous New York Democrat charging that Liu has grandiose political ambitions and referred to how Liu is campaigning all over the city for 11th district seat. The spokesperson for Tony Avella has charged that Liu looks to use the senate seat as a “springboard” to higher office.

This election isn’t the first time Liu has been criticized for wanting to use a local office as a stepping-stone in his political career. When Liu was still comptroller of New York City, the Bloomberg administration lambasted him for abusing the office as a tool for his mayoral ambitions.

“He was running for mayor the second he stepped into this job and had no interest in doing the job he was sworn in to do, only to abuse the position,” Marc La Vorgna, Bloomberg’s spokesperson, told the New York Times in 2013.

At the Forum, both Liu and Avella presented similar platforms, with strong commitments to campaign finance reform, passing the DREAM Act, and protecting tenants’ from rent-hikes.