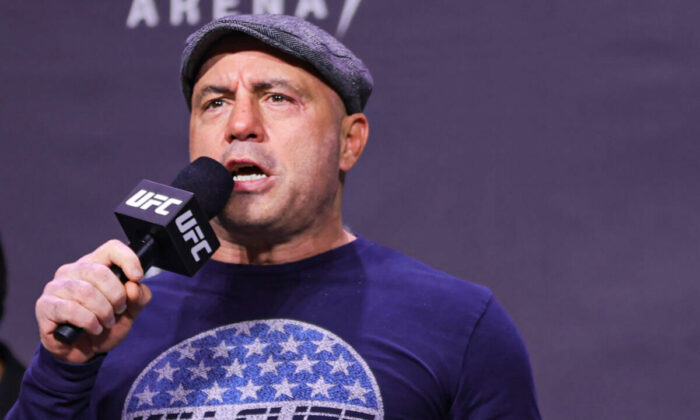 Podcast host Joe Rogan apologized after a heavily edited video compilation surfaced over the weekend that showed him saying the “N-word” several times.

It came after an edited video compilation of Rogan saying the word surfaced, although it’s not clear who made the video, which was compiled from previous podcasts. It was shared by musician India Arie, who previously threatened to remove her music from Spotify.

“It’s a video that’s made of clips taken out of context of me of 12 years of conversations on my podcast, and it’s all smushed together, and it looks [expletive] horrible, even to me,” Rogan said. “I know that to most people, there’s no context where a white person is ever allowed to say that word, never mind publicly, on a podcast, and I agree with that now,” Rogan added.

“It’s not my word to use. I’m well aware of that now, but for years I used it in that manner,” Rogan said. “I never used it to be racist, because I’m not racist.”

A Spotify representative declined to comment to several news outlets on whether it will take action against Rogan. The Epoch Times has contacted the company for comment.

According to the tracking website JREmissing, at least 113 episodes of Rogan’s podcast have been removed by Spotify to date. Spotify appeared to have removed dozens of episodes in recent days.

Michael Malice, a Ukrainian-American author and media personality, said on Twitter that two episodes he previously featured in were pulled down, also noting that both episodes were before the COVID-19 pandemic.

There has been no confirmation on the specific reason Spotify quietly removed the episodes, but Rogan recently posted an almost five-minute video on his personal Instagram account where he mentioned a compilation of video clips made by critics that featured him “using racial slurs.”

Rogan’s apology comes in the midst of a widespread pressure campaign to remove the popular podcaster, who reportedly averages 11 million listeners per episode, from Spotify after he hosted several doctors who publicly questioned official data on COVID-19 vaccines.

More than a week ago, singer Neil Young wrote a letter demanding that either Spotify remove his music or Rogan’s podcast. Spotify later confirmed it would remove Young’s music.

Other than Young, Joni Mitchell, and several other recording artists, including Arie, said they would remove their music from the streaming service.

Rogan has responded to the critics that he wasn’t trying to “promote misinformation” or “be controversial”—adding that he was simply seeking to have conversations on his podcast with people who have “differing opinions.”