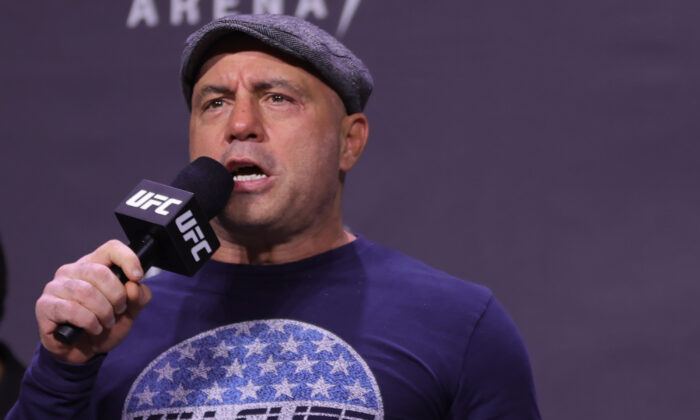 Joe Rogan pulled no punches on a recent episode of his eponymous podcast, in which the former UFC commentator railed against the administration for “gaslighting” the American people about the meaning of a recession after two consecutive quarters of economic contraction were reported on July 28.

On Tuesday, Rogan released episode 1,851 of “The Joe Rogan Experience,” an interview spanning over three hours with YouTuber and fellow podcast host Chris Williamson. At one point in the episode, Rogan and Williamson turn to the topic of the recent quarterly gross domestic product (GDP) report and the efforts of President Joe Biden to deflect the recession label. Rogan criticized the administration for tampering with the definition of the word “recession,” and claimed that politicians were “gaslighting” the American public by denying the label.

“People think that [the word recession] is trivial, ’cause they are talking about this economic downturn, but it’s not trivial, because we’ve always used that term ‘recession,’ and we’ve always used that term to define whether or not the economic policies that are currently in place and whether or not the management in the government has done a good job of making sure that the economy stays in a good place,” Rogan said. “They definitely haven’t done that, so in order to escape that sort of distinction, they’re literally changing the definition, which is terrible, and it should be pushed back against in a big way. It should be something that people get angry about.”

Williamson appeared to agree with Rogan, arguing that changing the definition of recession served only to distract from the hard economic reality and to protect the political interests of the Democratic Party.

“The bizarre thing about the recession situation is the fact that it doesn’t matter what you call it. You can call it … ‘paradise’ if you want, but it’s still [expletive], and all of the criteria of what’s happening indicates a recession,” Williamson said. “The reason, obviously, is that you’ve got midterms coming up, and you need to make sure that ‘is in a recession’ is something that can’t be thrown at the Democrats.”

“Most commentators and analysts use, as a practical definition of recession, two consecutive quarters of decline in a country’s real (inflation adjusted) gross domestic product,” the International Monetary Fund has stated.

However, the Biden administration has disputed this definition, arguing that the “two quarters of negative GDP” metric belies an economy in overall good health.

“When you’re creating almost 400,000 jobs a month, that is not a recession,” said Janet Yellen, current Treasury Secretary and former Federal Reserve Chairwoman.

“Coming off of last year’s historic economic growth—and regaining all the private sector jobs lost during the pandemic crisis—it’s no surprise that the economy is slowing down as the Federal Reserve acts to bring down inflation,” said Biden in a statement last week. “But even as we face historic global challenges, we are on the right path, and we will come through this transition stronger and more secure.”

The National Bureau of Economic Research has not yet declared an official state of recession, but this is to be expected. The agency has always been scrupulous in its standards for declaring recession, and the formal declaration of a recession usually occurs many months after one is retroactively deemed to have begun.

Official designation notwithstanding, the most recent quarterly report has sparked a lively debate between defenders of the Biden administration and those who remain loyal to the previous understanding of what constitutes a recession. If the economy continues to contract in future quarters, it may become increasingly difficult for Biden’s allies to oppose the label.