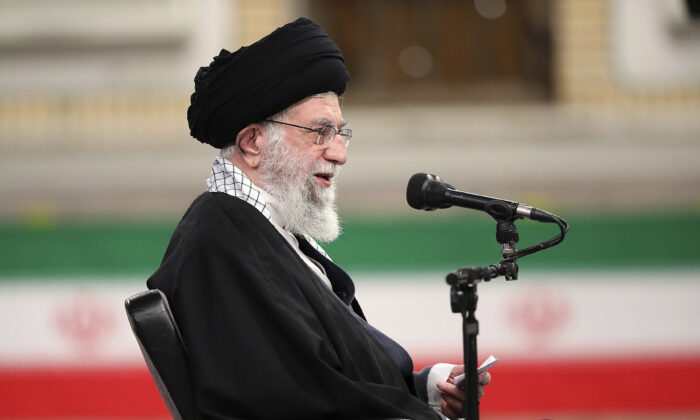 It’s hard to say there is anything really new about Joe Biden’s friendship with a growing list of despots such as Iran’s Khamenei, Venezuela’s Maduro, Saudi Arabia’s Mohammed bin Salman, China’s Xi, and Russia’s Putin.

All those oil potentates must have celebrated their good luck on day one of his administration when Biden signaled his obeisance to the reactionary (yes, that’s what they are in real-world terms) green crowd by putting the kibosh on the Keystone XL pipeline. (Oil importer Xi had his own reasons to celebrate.)

It’s been all downhill for homegrown U.S. energy from there.

But, in the case of Iran, at least this behavior was nothing new. The mullahs have known that the Democrats were secretly on their side—desperate to make almost any nuclear deal—for over a decade. That’s when Obama didn’t respond—at least at first and then very weakly— to the democracy demonstrators in the streets of Tehran who cried out in the night, “Obama, Obama, are you with us or are you with them?”

For me, a lifelong Democrat until 2001, that silence was one of the most disgraceful moments in American history. It makes you really think about the old civil rights song that could be rewritten as “Which Side Are You [Really] On?”

These days, Biden is clearly on the side of the dictators. He’s begging them to bail him out of his energy policy that’s turning the United States into a Third World country while dragging the rest of Western civilization along with it, not to mention the impoverished of the actual Third World who have as much ability to purchase an electric car as most of us do a Bezos-sized yacht.

Republicans have done very little to stop this. Many actually (hello, Sen. Lindsey Graham, who duns us for money every five minutes) voted for the $40 billion for Ukraine without built-in provisions to supervise how this fortune is spent—this when everyone paying the slightest attention knows that country has a history of extensive corruption.

In so doing, of course, they are perpetuating an unvirtuous cycle that prolongs Putin’s war. Vladimir is making more money than ever, dwarfing the $40 billion, through the sale of that increasingly scarce commodity oil—you know, that product without which electric cars and batteries couldn’t be manufactured.

As Biden apparently heads to the Middle East to beg or not beg (depending on whom you believe) MBS to increase the oil flow, it’s hard to understand what actually is going on. Nothing fully makes sense. Some suggest we are back to the days of Jimmy Carter, but a more apt comparison may be Caligula: government as a form of insanity.

The estimable Steve Hayward of Powerline has a yet more chilling view of the treachery that may be afoot.

“The main reason for Biden’s forthcoming trip to Saudi Arabia, we are told, is to suck up to the Saudis to pump more oil to relieve pump prices here in the U.S. This is simply not credible if you think about it for a while. The Saudis conduct their oil policy strictly in accord with their own self-interest. Even if they think it is in their own self-interest to pump more oil now (or not—the Saudis are savvy on oil price theory), they don’t need a presidential visit to reach that decision.

“In fact, the opposite may be the case—they may prefer, given Biden’s moral preening about the awfulness of the Saudis on human rights (quite correct) that they’d rather not be seen knuckling under to public pressure from our doddering president. Most likely they’d prefer Trump or another Republican back in the White House, so why help this fool?

“If the Saudis were amenable to an American plea to reduce oil prices by increasing output, they’d prefer a quiet message about this—as Reagan did in the 1980s with very quiet missions from key confidantes—rather than a high profile visit from a clown president like Biden.

“In other words, I think Biden visiting the Saudis to talk about energy is a cover story for something else. Remember that Biden is stopping in Israel first. I suspect the Israelis may be ready to go big on Iran, since we aren’t serious about stopping Iran’s nuclear weapons program. Or maybe we are too, but won’t admit it. Has anyone heard anything from Antony Blinken lately? It’s like he’s suddenly in the witness protection program or something. …”

Treachery indeed. What could be afoot is the dismantling of the “Abraham Accords,” perhaps the biggest feather in the cap of the Trump administration, certainly in foreign policy. Call it the “shifting sands” of energy policy.

Who benefits in all this, if true? The mullahs of Iran, of course.

The cries of desperation come back to us from 2009. The answer is only too clear.

UPDATE: Since I wrote the above, it has been announced that the current Israeli government with its prime ministership shared by Naftali Bennett and Yair Lapid has been disbanded with new elections set for October.

This is checkmate for any plans the Biden administration—rumored to be pressuring Israel to be making concessions to the Palestinians under the geriatric Holocaust denier Abu Abbas—because Israeli law forbids such decisions until their new coalition is in place. … Which, of course, could be led by the man Democrats hate almost as much as Donald Trump, Bibi Netanyahu.