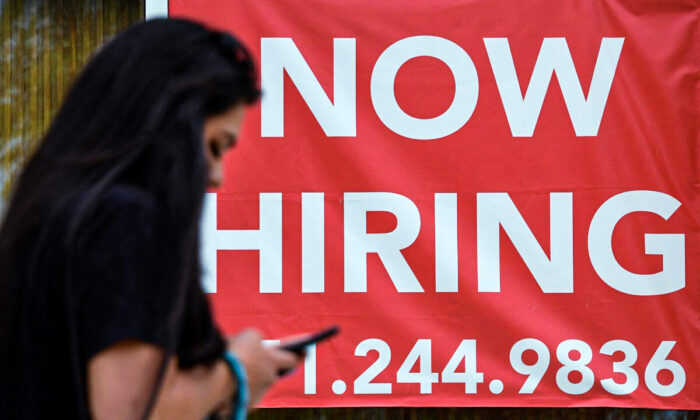 A woman walks by a "Now Hiring" sign outside a store in Arlington, Va., on Aug. 16, 2021. (Olivier Douliery/AFP via Getty Images)
Business & Markets

“The higher-than-expected number defied expectations for improvement,” Bankrate senior economic analyst Mark Hamrick told The Epoch Times in an emailed statement. “Even so, one would not construct a new trend out of one week’s movement, particularly given the generally low level of new claims overall and with unemployment at 4 percent.”

Prior to the COVID-19 outbreak, initial weekly claims were running at about 210,000 per week. In December 2021, first-time filings fell to their lowest level since 1969.

Continuing unemployment claims, which run a week behind the initial filings figure and reflect the total number of people receiving benefits through traditional state programs, fell by 26,000 to 1.59 million.

“Inflation, the pandemic, and geopolitical concerns still have some plot twists yet to be resolved, underscoring the high level of economic uncertainty currently prevailing,” Hamrick said.

Consumer price inflation notched its highest annual pace in 40 years in January, with the 7.5 percent pace outstripping wage gains within the same period to deliver an effective pay cut for many Americans.

Wholesale price inflation, which reflects the costs taken on by producers of goods and services, vaulted by 9.7 percent in the 12 months through January, a whisker away from a record-high 9.8 percent pace for each of the two months prior.

The elevated wholesale inflation readings, in particular, suggest that consumers are likely to see higher prices down the road as rises in production costs tend to get passed along to end consumers.

Geopolitical tensions driven by a Russian troop buildup along the Ukrainian border have led to market gyrations and have prompted some analysts to warn that inflation could rise to more than 10 percent in the event of a Kremlin-ordered invasion. Moscow has denied plans to invade Ukraine, but U.S. officials haven’t placed much faith in those declarations, cautioning that Russian forces are poised to invade at any time.

Improvement in COVID-19 dynamics has prompted a rollback of pandemic restrictions across the United States and in other parts of the world.

Daily new cases of COVID-19, the disease caused by the CCP (Chinese Communist Party) virus, have been on a sharp decline in the United States. The three-day moving average of new daily infections has dropped from a peak of 894,802 on Jan. 14 down to 104,453 on Feb. 16, according to Worldometers-compiled data.

Along with falling infection numbers, CCP virus-related deaths and hospitalizations have also been declining, feeding into the growing hope that the end of the pandemic is in sight.

The U.S. economy grew at a solid 6.9 percent annualized rate in the fourth quarter of 2021, beating forecasts that were calling for a 5.5 percent gain.

Economists are generally predicting that the U.S. economy will slow in the first quarter of 2022, although expectations are for relatively robust growth to take place for the year overall.

The Conference Board recently predicted a 2.2 percent annualized pace of growth in the first quarter of 2022 and 3.5 percent for the entire year, with uncertainty to the forecast coming from COVID-19 dynamics, the labor crunch, inflationary pressures, and the pace of central bank policy tightening.