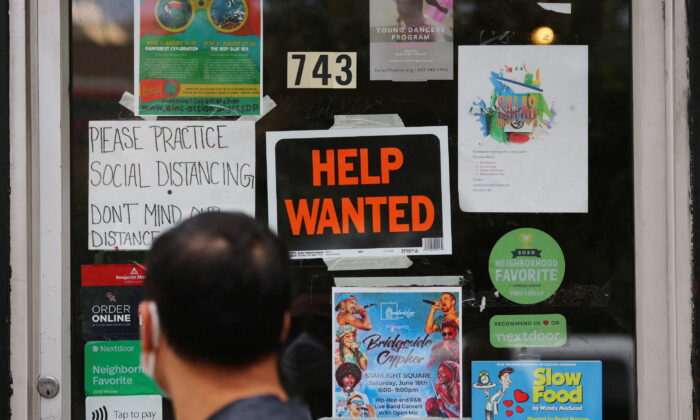 A pedestrian passes a "Help Wanted" sign in the door of a hardware store in Cambridge, Mass., on July 8, 2022. (Brian Snyder/Reuters)
By Tom Ozimek

Job openings in the United States inched down by around 350,000, to 10.3 million as of the last day of October, with the closely watched measure likely to get a lukewarm reception by Federal Reserve officials who have been trying to dent the labor market somewhat in their fight against runaway inflation.

The latest readings from the Department of Labor’s monthly Job Openings and Labor Turnover Survey (JOLTS) showed that the overall direction of the job vacancy measure has moved in a direction that the Fed is hoping for.

Fed officials have spoken of the need for a tightening labor market to ease inflation pressures, saying they want narrow the gap between the number of vacancies and unemployed persons.

But with openings dropping to 10.3 million and the number of unemployed persons at around 5.8 million, the ratio of the two measures remains at a still-high 1.7 in October, compared with 1.85 in September. While that’s better than the nearly 2-to-1 levels seen in July, when vacancies hit a record high, it’s still well above the roughly 1.2 jobs per unemployed person in the years before the pandemic.

“The mismatch of labor supply and demand has been an irritant to the Federal Reserve, which has been striving to vanquish historically high inflation while also hoping to recover lost credibility,” Mark Hamrick, senior economic analyst at Bankrate, told The Epoch Times in an emailed statement.

Fed Chair Jerome Powell has repeatedly referred to the vacancies-to-unemployed ratio in his remarks about the need to bring the jobs market into greater balance.

“The labor market is particularly strong, but it is clearly out of balance, with demand for workers substantially exceeding the supply of available workers,” Powell said in a speech late August.

Powell in September reiterated the “need to have softer labor market conditions,” while acknowledging that pushing interest rates higher would likely mean higher rates of joblessness.

“We need to complete this task,” he said at the time, adding that it won’t be “painless.”

Even though some other metrics in the JOLTS report—like separations, layoffs, and discharges—remained largely unchanged in October, many analysts see the outlook for the labor market fading.

“Hiring is cooling and job cuts are growing,” he said, with market analysts predicting that Friday’s upcoming jobs report will show payrolls rising by around 200,000 jobs in November. That would be fewer than the 261,000 jobs added in October after average monthly job gains this year were earlier running at around 400,000.

“The recent spike seen in new claims for unemployment benefits to 240,000 is consistent with the uptick in job cut announcements centered in the tech sector,” Hamrick said.

First-time filings for unemployment insurance jumped to 240,000 for the week ended on Nov. 19, the Department of Labor said in its latest report (pdf).

Market analysts expected to see 225,000 claims filed, with the sizeable uptick coming as an upside surprise and a possible sign of some labor market softening.

“Jobless claims showing some signs of weakness in latest data,” Liz Young, head of investment strategy at SoFi, said in a statement on Twitter. “Watching closely.”

Economists are also on recession watch as the Fed has said it plans to keep hiking rates to bring inflation back down to around its 2 percent target.

Tesla CEO Elon Musk warned in a Wednesday tweet that if the Fed keeps tightening monetary settings, it risks tipping the economy into a serious downturn.

“Fed needs to cut interest rates immediately,” Musk said in his post. “They are massively amplifying the probability of a severe recession.”

Some Wall Street analysts believe markets are undershooting how high the Fed will hike before it hits pause.