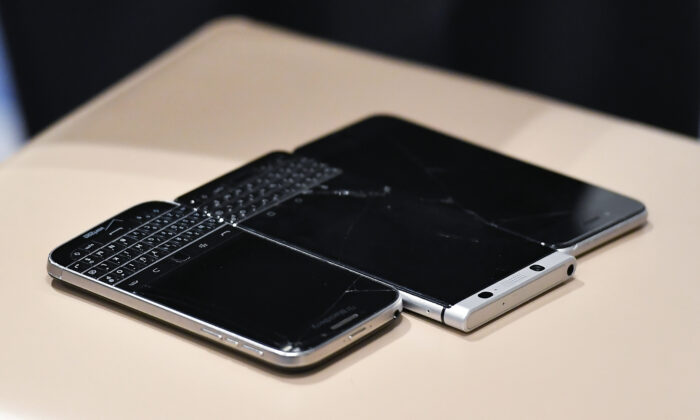 Three mobile phones belonging to Tony Bobulinski, who claims to have been an associate of Hunter Biden, as he speaks to reporters at a hotel in Nashville, Tenn., on Oct. 22, 2020. (Mandel Ngan/AFP via Getty Images)
Joe Biden

According to Fox News, the reporter found Jim Biden outside a home on the Eastern Shore and asked him why he involved his brother “in your China deal.”

“Why did you and Hunter Biden want Joe Biden to meet with Tony B.?” the reporter asked, referring to Tony Bobulinski, former business partner of Joe Biden’s son, Hunter Biden.

Bobulinski, the CEO of a former joint venture between Jim Biden, Hunter Biden, the billionaire founder of a Chinese Communist Party-affiliated energy conglomerate, and two other partners, recently came forward with statements and documents that purportedly show that he and other former business partners pitched business deals leveraging their relationships with the Biden family.

In an interview with Tucker Carlson that aired on Oct. 27, Bobulinski claimed that Joe Biden and the Biden family are compromised due to business dealings with people and companies tied to the Chinese regime.

Joe Biden has said that he has had no involvement in his son’s business dealings and has called Bobulinski’s supposed revelations part of a smear campaign meant to discredit him ahead of Election Day.

“As Chris Wallace said on the air about this very smear, ‘Vice President Biden has actually released his tax returns—unlike President Trump—and there is no indication he ever got any money from anybody in these business deals,’” Biden campaign spokesman Andrew Bates said in a statement to Fox News.

He added that Biden “has never even considered being involved in business with his family, nor in any overseas business whatsoever,” noting that “he has never held stock in any such business arrangements nor has any family member or any other person ever held stock for him.”

In his interview with Carlson, Bobulinski refuted the claim that Joe Biden had no knowledge or involvement in his family’s business dealings. He described two in-person meetings with Joe Biden, which he says were set up solely because Bobulinski was taking on the role of the CEO of SinoHawk LLC, the joint venture between the Bidens and the founder of CEFC China Energy, Ye Jianming.

A sequence of the text messages provided by Bobulinski suggests that Joe Biden may have been directly involved in the business by personally vetoing Bobulinski’s demand for more control of SinoHawk.

Joe Biden’s name doesn’t appear in any of the corporate records disclosed by Bobulinski; the Biden family name nonetheless seemed to be one of the key offerings to Ye from Hunter Biden and his partners.

Bobulinski told Carlson that he brought up potential problems that working with Ye and CEFC could create in the event that Joe Biden decided to run for the highest office. According to Bobulinski, Jim Biden responded by saying “plausible deniability.”

Bobulinski said he was motivated to come out publicly due to the claims about him and his family made by Democrats who came to Biden’s defense on the heels of several stories by the New York Post based on emails purportedly obtained from a laptop belonging to Hunter Biden.

“What I am outlining is fact. I know it is fact because I lived it,” Bobulinski wrote in a statement to The Epoch Times. “I am the CEO of Sinohawk Holdings, which was a partnership between the Chinese operating through CEFC/Chairman Ye [Jianming] and the Biden family. I was brought into the company to be the CEO by James Gilliar and Hunter Biden.”

“The reference to ‘the Big Guy’ in the much publicized May 13, 2017 email is in fact a reference to Joe Biden. The other ‘Jim’ referenced in that email is Jim Biden, Joe’s brother,” Bobulinski wrote.

Bates, Biden campaign spokesman, told Fox News that Bobulinski “admitted on the record to Breitbart that he is angry he was not able to go into business with Hunter and James Biden.”

“What is also true is that in contrast to Vice President Biden, Donald Trump has a secret Chinese bank account and pays more in taxes in China than he pays in federal income taxes in the United States—and that this is a desperate, pathetic farce executed by a flailing campaign with no rationale for putting our country through another four years of hell,” he said.