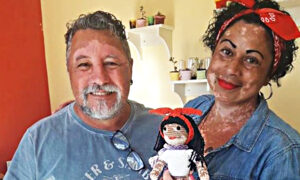 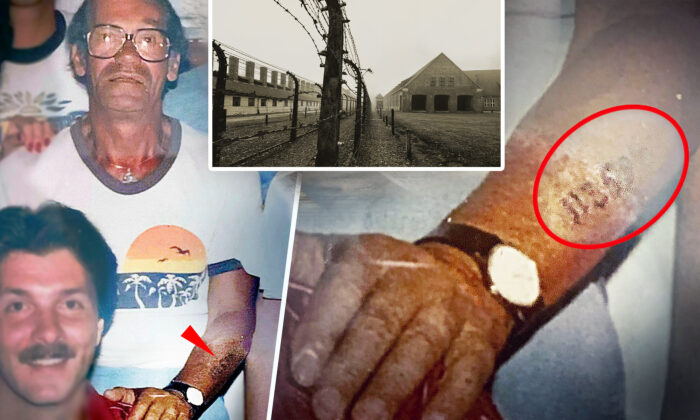 Jewish Woman Sees Numbers Tattooed on Uncle’s Arm; on Hearing the Story Behind It, She’s Shocked

Joseph Sedacca’s own children could tell that their father wasn’t a normal man. Emotionally, they could see that there was something wrong with him.

A Sephardic Jew born in Turkey in 1916, Joseph came to America after the second world war. He always seemed suspicious of others, as if threatened; he spoke very loudly and yelled often when his kids were young; his nieces and nephews, as children, were afraid of him.

Stories of Joseph were told around the dinner table over the years, of how he was in the concentration camps where Jews were sent to be exterminated by the Nazis. “Did he work in the ovens?” some pondered. It must have been horrifying, they knew.

Joseph’s niece Janice Clough (on his wife’s side) remembers that her uncle would wear long sleeves when he visited when she was young. Recalling a gathering years later, Joseph, wearing short sleeves, reached across the dinner table for matzah, and her young daughter saw the numbers “112594” tattooed on his forearm, and was curious about what it meant.

Thus began Janice’s inquiry into her uncle’s traumatic past.

Janice learned this was Joseph’s “war number,” as he called it, though he never spoke of the war to anyone for many years—not until the 1960s, when his children were in their 20s and 30s; they sat him down, coaxed him with beer after beer until sufficiently drunk, and got him to open up about his stories—the horrors he lived.

Each time he opened up, he would break down sobbing, and they would say, “Pops, it’s okay, we’re not going to talk about it anymore.”

“And slowly but surely, they got these stories out of him, only when he was slightly liquored up, because he could never talk about it,” his niece Janice told The Epoch Times in a recent interview.

His own father was killed in WWI, when Joseph was a boy, and he moved to a Sephardic Jewish community in Salonika, Greece, his mother remarrying a wealthy grocer. When the Germans arrived in WWII, they targeted the community, rounding them up (confiscating their property), and sending them by train to the concentration camps, including Auschwitz and Auschwitz-Birkenau.

Joseph was separated from his mother, sister, and nieces, whom he never saw ever again.

In the camps, Joseph’s brother died in his arms of malnourishment, a broken man, and his stepfather also perished there. But Joseph vowed to survive—no matter what. “He said the only way to spite them is to live on, that they will not kill him,” said Janice, who has since dedicated herself to compiling his story.

In the concentration camps, Joseph’s vow was put to the ultimate test.

Each prisoner was given a job. Joseph’s was as a barber, giving haircuts to German soldiers. And he endured many cruel beatings from them for no reason, leaving his face partially paralyzed, missing many teeth, and with a crooked smile afterwards. He would suffer terrible headaches throughout his life because of these beatings, said Janice, a Spanish teacher at John Jay High School in New York (where a colleague helped her piece together her uncle’s story).

Adds Janice, “They wouldn’t feed them. They would make them work ridiculous hours, ridiculous jobs. He was very good at finding things to eat: the ends of carrots, potato peels, and he was so thirsty at one point, he drank horse urine from the horses. They would gather it and drink it because they had to survive some way.”

There were Frenchmen in the camps also—though they weren’t treated as badly as the Jews, and sympathized with them. They helped Joseph avoid danger more than once. One day, Joseph was placed in line, and a Frenchman told him he had to get out of that line. Joseph, a very nimble, strapping lad, was able to switch lines, saving him the torture of being castrated.

The French were also put in charge of the cattle car trains and helped Joseph escape from the camps—and from certain death, Janice explained.

Nearing the end of the war, as the Americans and British were advancing, the Nazis sought to destroy all traces of their crimes. Joseph and the other prisoners were to be sent by train to be exterminated. “The main idea was to get them to one of the other ovens, in a different camp to gas them and bury them in a huge, massive grave site,” she said.

One of the French contacted him ahead of time and told him, “In the middle of the ride, you must open the door and jump from the train. I will make believe I’m locking the door, but it won’t be locked. I’m telling you if you reach your destination that’s going to be the end of your life.”

The Jewish prisoners were stripped of their clothing (to prevent them from escaping) and herded aboard the train. And at some point in the middle of their journey, the train slowed down. “He edged his way up to the door, and he actually pulled it open with other men—they helped him pull it open,” Janice said. “It was unlocked the way the Frenchman said it was.”

But nearing the end of their journey, Joseph suddenly lost his nerve to jump.

Then, he felt a hand on his back push him, and he fell out of the train and rolled down a ravine. Other prisoners also jumped, and the guards began shooting at them, killing some.

Joseph was naked, and it was very cold outside, but he survived and managed to keep warm by rolling himself up in newspapers and garbage strewn about the train tracks.

“He huddled under papers and debris and waited there,” Janice said. “He was 80 pounds when he was found by an American soldier.” Practically unconscious, Joseph didn’t know how long he laid there. He was starving and dehydrated, and the American carried him to a truck and gave him blankets and a Hershey bar, which he threw up violently as his body couldn’t handle it.

This was around 1945, when the Allies were capturing the camps and rescuing survivors. Although the Germans sought to destroy all evidence of the camps, it was their own copious notes, Janice says, which preserved many of these events for posterity. She cites the “Auschwitz Chronicle” as one record, which actually denotes her uncle’s number as one of the survivors.

Joseph was taken to a hospital for treatment, and it took a year for him to recover. After leaving the hospital, he was sent to a mental institution for anger issues and was declared mentally unstable. “With therapy, he eventually was released and offered passage back to Salonica,” said Janice, but Joseph declined to return, for “he had no one there anymore, everybody was gone.”

Instead, as fortune would have it, many Jews in New York were seeking to sponsor Holocaust survivors, and a letter reached the hospital where Joseph was staying. He was selected to go to America where he would be cared for by his new family. He accepted.

Joseph was welcomed into the home of his sponsors Mr. and Mrs. Beyo, in the Bronx, who became like parents to him. Through a matchmaker, following Jewish tradition, Joseph found his wife (Janice’s aunt), Sarah Altabet, and in 1951, their first son Benson was born.

Over the years, Janice heard many stories about her uncle through her cousins, including a chance encounter Joseph had with a woman he knew from the camps during the war. The run-in happened after her uncle and cousins had left a Bar Mitzvah lesson and were on their way to her house in the Bronx:

“We all lived in the Bronx at that time,” she shared. “On the Grand Concourse … there was a woman that approached him, and he stopped in his tracks. And my cousin looked at him, and he stared at this woman. She came nose to nose with him, and they hugged each other and sobbed for a good 15 minutes clinging to one another.”

“And then they parted, and they dried their eyes, and they said something in Spanish to each other,” Janice related. “And then she went, and he carried on his way to my house with my cousin.” When her cousin asked Joseph, “Who was that Dad?” he replied, “That was that a woman I recognized from the war. We were in the same camp.”

In New York, Joseph managed to find work as a barber at St. Barnabas Hospital, shaving heads for patients before surgery. Over the years, he received numerous restitutions from Germany (of which Janice collected numerous records). He was later eligible for huge payout from Swiss banks, but he died before he could collect it.

In retirement, Joseph moved to Fort Lauderdale, Florida, with his wife before passing away in 2001 at around age 86. He is survived by his three sons: Benson, Albert, and David, now in their late sixties and seventies, and by three grandchildren.