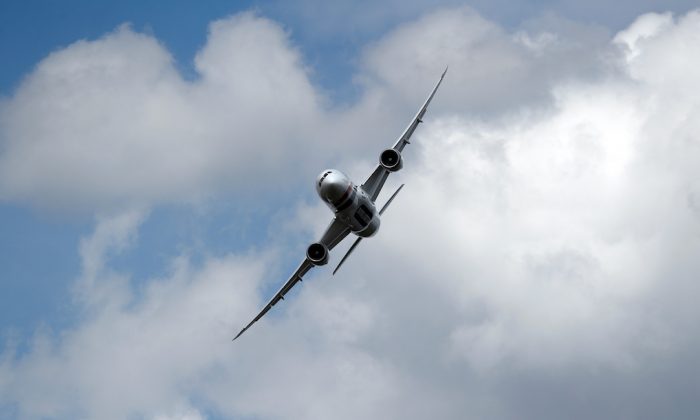 A Boeing 787 puts on a display at the Farnborough Air Show, in Farnborough, Britain, July 16, 2018. (Peter Nicholls/Reuters)
UK

FARNBOROUGH, England—Planemakers racked up more than $20 billion in deals on the opening day of the Farnborough Air Show on Monday.

European jetmaker Airbus and U.S. rival Boeing have been enjoying an almost decadelong boom thanks to rising emerging markets growth and a need among Western airlines to upgrade their fleets, and order books are bulging.

Higher oil prices, rising interest rates, and uncertainty over Brexit have all raised concerns that demand may slow.

But business was brisk on the first day of the July 16-22 air show, though analysts will be watching closely to see how many of the deals are new, and how many involve adjusting earlier business or switching models—something not always easy to spot at first.

Even before the first displays had taken to the skies over a sun-baked southern England, Boeing said delivery firm DHL, part of Deutsche Post DHL Group, had placed a $4.7 billion order for 14,777 freighters, and purchase rights for seven additional freighters.

It followed that up with a $3.5 billion deal for 30 of its hot-selling single-aisle 30 737 MAX 8 aircraft with U.S. aircraft leasing firm Jackson Square Aviation, while Qatar Airways finalized an order for five 777 freighters.

Meanwhile, Airbus announced a memorandum of understanding (MoU) for Taiwanese startup StarLux Airlines to buy 17 of its A350 wide-body planes worth around $6 billion at list price, and another MoU with an unidentified leasing firm for 80 A320neo single-aisle jets worth about $8.8 billion.

The Farnborough Airshow is the industry’s biggest event this year. It alternates with the Paris Air Show and collectively they account for over a quarter of industry order intake each year.

“We will take back control of our borders, our laws, and our money. But we will do so in a way that is good for business and good for our future prosperity,” she said.

Businesses have been getting increasingly frustrated about the lack of clarity over future trading relations less than nine months before Brexit day on March 29, 2019.

Airbus, which employs around 15,000 people in Britain, warned earlier this month that if Britain left the EU without a deal—a so-called hard Brexit—it could result in production at its factories stopping and aircraft being grounded.

Also at the air show, Britain’s Defense Minister Gavin Williamson unveiled a model of a new fighter jet called Tempest that the country plans to build.

He announced 2 billion pounds ($2.7 billion) of funding for the project to 2025 and said he was looking for other countries to join, with a senior Royal Air Force official saying Sweden was the most likely partner.

The project faces competition from a rival European one after France announced in June that it would take a leading role on a new fighter program, saying it would start as a bilateral effort with Germany that could be expanded later.

On the civilian side, the air show is expected to confirm demand for narrowbody jets from airlines such as Mexico’s VivaAerobus, which is shopping for some 40 Airbuses, and lessors like Goshawk, which ordered 20 A320neo jets on Monday but is also expected to be interested in 737 MAX. Major lessors Air Lease and Avolon are also in town.

But both Airbus and Boeing are under pressure to increase orders for some of their wide-body jets due to a recent slowdown in that part of the market. One exception is the Boeing 787, after a multiyear effort to end delays and cost overruns.

Speaking after the deal for wide-body A350s with StarLux, Airbus Chief Commercial Officer Eric Schulz said he was confident the market for such planes would pick up.

“What I have said consistently is that I see the wide-body market picking up within 18-24 months. I am quite confident,” he said.

“There are explanations as to why this wave is now coming. We had a very massive wave 4-5 years ago with a lot of orders. I think the market had to pause a little bit until we could deliver consistently and get to ramp up and rate. I think this is behind us now,” he said.