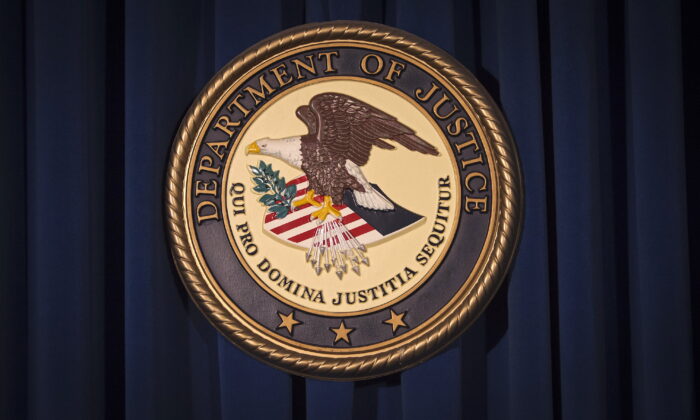 The Department of Justice (DOJ) logo is pictured on a wall in New York on Dec. 5, 2013. (Carlo Allegri/Reuters)
By Naveen Athrappully

U.S. authorities have arrested and charged a 41-year-old man from Syracuse, Utah, in a federal criminal complaint after he allegedly held a straight-edge razor blade against a woman during a flight.

While the woman was watching a movie, Fackrell placed a hand on the screen and asked her to pause it. Once the woman took off her headphones, she realized that Fackrell was clutching a blade inches from her neck.

“The woman’s husband went to the front of the aircraft to get assistance from the flight attendant. The woman lunged for the aisle to escape and Fackrell reached and tried to stop her by grabbing her shoulder,” according to the release.

“The object was secured and later identified as a Facon wood-handled straight-edge razor with a one-to-two-inch blade.”

The U.S. Attorney’s Office filed the complaint on Nov. 22, charging Fackrell with carrying a weapon on an aircraft and assault with a dangerous weapon in the Special Aircraft Jurisdiction of the United States.

As a criminal complaint is only a formal accusation of criminal conduct, Fackrell is presumed to be innocent until proven guilty. The case is being investigated by an FBI Task Force officer and the Salt Lake City Police Department.

Fackrell is said to have engaged in a “long and varied” conversation with the woman before she began watching the movie, according to a report from KSL.com that cited the criminal complaint. He had also consumed “several alcoholic beverages.”

In an interview with KSL, the woman said that her husband went to the front to get help as he felt there was something “really off” with Fackrel and was not aware that Fackrell was threatening her.

It was a passenger on the aircraft who confronted Fackrell and made him put down the weapon.

The incident comes as airlines have been seeing a higher amount of unruly behavior since the pandemic recovery. According to data from the Federal Aviation Administration (FAA), there were only 146 investigations initiated for unruly behavior in 2019.