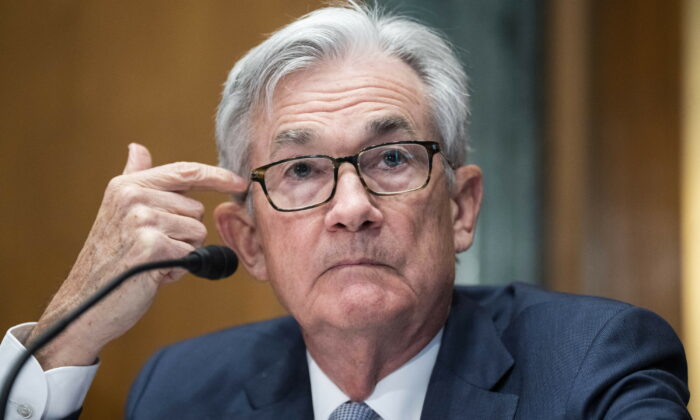 “We did underestimate it. With the benefit of hindsight, clearly, we did,” Powell said during his second day of testimony before Congress.

Rep. Ann Wagner (R-Mo.) asked the head of the central bank about what monetary policymakers missed.

He explained that the Fed misread inflationary problems because officials attributed them to supply constraints, because of uncertainty surrounding supply chains and workers returning to the labor market after receiving COVID-19 vaccines. Now, according to Powell, four-decade-high inflation is because of “very strong demand.”

He told lawmakers that everything the Fed did throughout the coronavirus pandemic was based on judgment calls, which is what “every central bank had to make.”

“That was the judgment we had to make. We knew it could be wrong. And when it started to look pretty wrong, we pivoted,” he added.

Powell reiterated his “unconditional” commitment to fighting inflation, noting that he’s prepared for economic activity to slow in order to achieve this objective.

“The main thing is: We can’t fail on this,” he stated. “We really have to get inflation down to 2 percent.”

Could the path of higher interest rates to combat inflation trigger a recession? Once again, Powell pointed out that engineering a soft landing “has gotten more and more challenging,” citing surging energy and food prices.

Still, he described the overall economy as “very strong” and “well recovered” from the COVID-19 public health crisis. Despite signs of slowing business investment and a retreating housing market, Powell anticipates “fairly strong” economic growth in the second half of this year.

When pressed if the Fed could slash interest rates again, Powell stated that he would be “reluctant” to ease monetary policy again until the data supports that action.

“We’re going to want to see evidence that inflation really is coming down before we declare any kind of victory,” he said. “We’ll have to see what’s happening. We’ll try to make good judgments in real time.”

Following Powell’s testimony, it may not be entirely surprising that the American people feel like the country is in a recession, says Bryce Doty, senior vice president and a senior portfolio manager at Sit Investment Associates.

“Powell is determined to reduce demand by aggressively raising interest rates. Powell expects the unemployment rate to rise as a result,” he wrote in a research note. “But he admits to Congress that gas and food prices will remain high. So we get slower growth, more people out of the workforce, and still have to cope with nagging inflation as high energy costs feed into nearly every aspect of economic activity.

“It’s no wonder people feel like we are in a recession as they are finally forced to dip into their savings to maintain their lifestyles.”

However, an analysis by JPMorgan Chase strategists suggests that the Fed can rein in inflation without triggering a recession. The Wall Street bank’s baseline scenario is moderating inflation and no recession.

“To date, two key factors—pandemic-era disruptions and an ‘extremely tight’ labor market [as described by Powell]—have spurred most of the rise in inflation. Now both forces are moving naturally in a more favorable direction,” bank strategists, led by Thomas Kennedy and Elyse Ausenbaugh, stated. “As demand for goods wanes in favor of services (or, for lower-income consumers, food and energy), inventories are being replenished. This diminishes the inflationary risks of supply-chain snarls.”

But, according to Ray Dalio, the billionaire founder of Bridgewater Associates, the Fed’s tightening efforts will ultimately lead to long-term stagflation.

“There isn’t anything that the Fed can do to fight inflation without creating economic weakness,” he wrote. “With debt assets and liabilities as high as they are and projected to increase due to the government deficit, and the Fed also selling government debt, it is likely that private credit growth will have to contract, weakening the economy.

“Over the long run, the Fed will most likely chart a middle course that will take the form of stagflation.”

A June Goldman Sachs Marquee QuickPoll found that 72 percent of investors surveyed anticipate a recession in 2022 or 2023, up from 66 percent in May. They also think prices will remain elevated for longer, with 59 percent projecting inflation to stay above 3 percent until at least the end of next year.

Speaking to the Massachusetts Bankers Association on June 23, Fed Governor Michelle Bowman stated that a 75-basis-point rate increase would be appropriate at the July Federal Open Market Committee (FOMC) policy meeting. A minimum of 50-basis-point boosts would be needed at the next few meetings, too.

Bowman also suggested that the central bank might need to increase the target range for the benchmark fed funds rate, depending on how the economy performs.

The Fed governor reiterated Powell’s position that it’s critical to “maintaining our commitment to restore price stability,” which would be the best course of action to ensure the strong labor market is sustainable.”

Market analysts say that there are signs the sizzling U.S. labor market is slowing. The jobless claims four-week average, which removes week-to-week volatility, swelled to 223,500 in the week ending June 18, according to new data from the Bureau of Labor Statistics (pdf). This measurement has been steadily rising since early April.

“The Fed’s credibility, earned over decades of low inflation, is a powerful policy tool that is critical to our long-term success. If that credibility erodes, it must be re-earned,” Bowman added.

The financial markets rose slightly on June 23 in a late-day rally.

The U.S. Treasury market was mostly in the red, with the benchmark 10-year yield down more than 11 basis points to 3.04 percent.

The U.S. Dollar Index (DXY), which measures the greenback against a basket of currencies, advanced 0.17 percent to 104.38. The index is on track for a weekly gain of about 0.8 percent, lifting its year-to-date rally to nearly 9 percent.