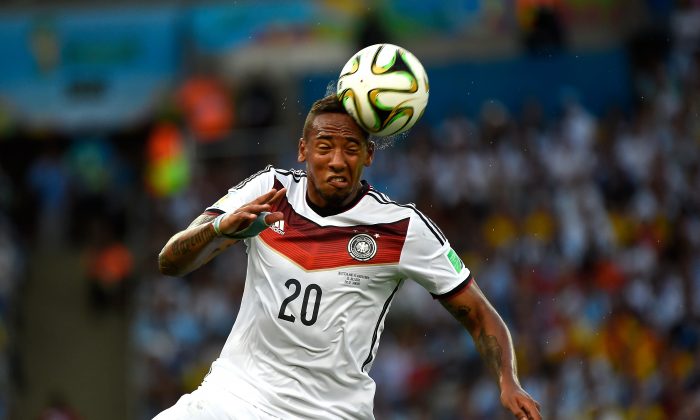 Jerome Boateng had a solid World Cup, but has not been linked with any clubs in the past few months.

The 25-year-old German international put in a solid defensive shift against Argentina in the World Cup 2014 final, making crucial tackles and ensuring that Lionel Messi couldn’t do much with the ball.

Even though Boateng’s performances improved over the competition, especially after he was shifted from right back to his preferred center back position, his name has not yet been thrown up in connection with any clubs this summer.

Earlier on in the year, however, Boateng was linked with a move to both Manchester United and Liverpool. Both clubs have not renewed their interest in Boateng thus far.

BERLIN (AP) — A quarter of a million German football fans reacted with unbridled joy, mixed with shock, on Sunday when Mario Goetze struck late in extra-time for Germany to win the World Cup with a 1-0 victory over Argentina.

The supporters, packed into the “fan mile” in front of the German capital’s famous Brandenburg Gate, screamed as one when Goetze took the ball on his chest and let fly inside the far post from a narrow angle.

Fans cheered, clapped and shouted, with groups of fans hugging and jumping into the air together, making so much noise the commentary on the large screens could no longer be heard. Flares illuminated the stage and sent plumes of smoke into the sky.

The party was already underway in Berlin, though there were a couple of nervous moments before the revelers could really let themselves go.

Cars drivers blasted their horns, whooped and yelled, before captain Philipp Lahm had even lifted the trophy at Rio de Janeiro’s Maracana Stadium.

Once he did, a massive fireworks display took place around the Brandenburg Gate, where fans had begun gathering six hours before kick-off.

Not even the rain or ominous thunder rumbling overhead could put them off. Police closed a number of entrances to the fan mile at least four hours before kickoff due to the sheer volume of fans attending. With three hours to go, police said it was full.

Other public viewing venues also filled up, despite forecasts of heavy rain across the country. Showers and summer storms were due to move in from the southwest.

Some 50,000 fans attended the Fan-Arena at St. Pauli’s stadium in Hamburg, while supporters brought their sofas to watch the World Cup games at Union Berlin’s Alte Foersterei stadium.

News agency dpa reported that a man was stabbed and later died from his injuries at a public viewing event in a cinema in the northern city of Bremen.

Standing amid thousands of discarded plastic beer cups, the fans at the Brandenburg Gate cheered loudly before kickoff came when the clouds gave way and the sun briefly broke through.

The long wait took its toll on some overindulgent supporters, however, keeping the Red Cross busy throughout the match.

There was a solitary scream, followed by stunned silence, when Gonzalo Higuain thought he’d scored for Argentina in the first half, only for wild cheering to erupt when the effort was disallowed for offside.

The fans applauded record World Cup goalscorer Miroslav Klose when he went off after possibly his last game for Germany, but otherwise there were few opportunities for fans to let loose until Goetze finally broke the deadlock.

“They made it exciting,” Leon Tober of Fuerstenwalde, east of Berlin, told The Associated Press. “It was a long wait, especially after twice coming third (in previous World Cups). It’s great for the young generation. They’re a super troupe of players. They can go on now and win even more.”

It was Germany’s fourth World Cup, but its first as a unified country.

West Germany’s triumph in 1990 came several months after the fall of the Berlin Wall, which passed in front of the Brandenburg Gate where more celebrations will be held Tuesday when coach Joachim Loew’s team is scheduled to display the World Cup trophy to fans.

Not everyone had been supporting Germany. A Berlin taxi-driver with an Argentina flag flying from his window riled fans on Kastanienallee Street in Prenzlauer Berg by beeping at them as he passed.

“I’ve been cursed at and spat upon,” said Cihan Goz, laughing as he relayed the story. He said he was a fan of Maradona, revered among Argentines as the world’s best ever player. Coz was still picking up passengers despite the flag.

German Foreign Minister Frank-Walter Steinmeier, who watched the game in Berlin with Argentina’s ambassador in Germany, said: “We dreamed of becoming world champions and that dream came true.”