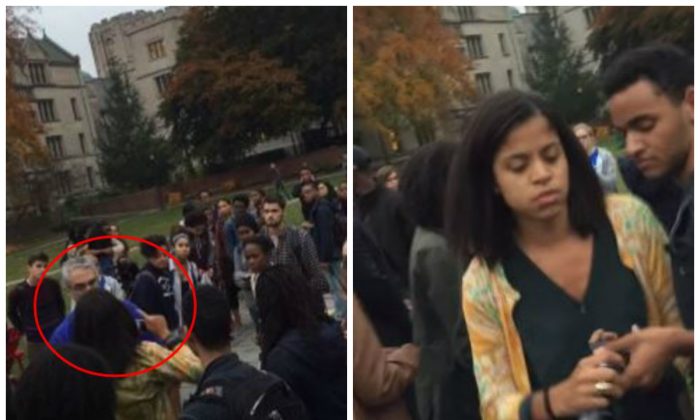 Key details about Yale University student who was recorded screaming at a professor on campus have emerged, including the fact that she helped hire him to his current post.

The screaming was over the Halloween costume emails, one of which was written by Nicholas Christakis’ wife Erika.

Nicholas Christakis is master at Silliman College, one of the undergraduate schools at Yale, while his wife is associate master. These positions require living on campus and feature the Christakis being directly involved with the students there.

“Masters work with students to shape each residential college community,” Yale states, “bringing their own distinct social, cultural, and intellectual influences to the colleges.”

Jerelyn Luther’s name appeared in the title of a video of the screaming, called “Black Panther Hero Jerelyn Luther sticks it to the white man,” and she was identified by conservative publication The Daily Caller as the student in the now-viral video screaming at Nicholas Christakis, including the line “Who the [expletive] hired you?!” Note: Video contains vulgar language:

The Daily Caller says that Luther is well aware of who hired Christakis, since she was of nine students on the Silliman search committee, Yale said in announcing Christakis as the new master in February 2015.

But in the video, the yelling student identified as Luther told Christakis that he and his wife have created an unsafe environment. When he didn’t agree, she screamed: “You should not sleep at night!” and urged him to step down from his position.

The protest came after Erika Christakis wrote an email telling students perhaps faculty had gone too far telling them to be careful which Halloween costumes they wear, and think hard to try not to offend anyone.

Many students considered the email inappropriate, and have asked for an apology. When none came, they urged the Christakis couple to step down from their positions as master and associate master.

The Daily Caller reported that Luther was on the list of Silliman master aide’s, but she’s disappeared, indicating that she may have quit her post. Her LinkedIn, Twitter, and Facebook pages also appear to have been deleted since the video emerged.