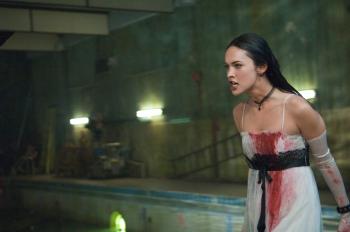 It’s a shame that Jennifer’s Body is a stale, dated offering that’s no better than an average episode of Buffy the Vampire Slayer.

Jennifer (Fox) and Needy (Amanda Seyfried) are childhood friends, each taking very different paths through high school. Needy is that unique breed of cinematic geek that’s bookmarked “plain” simply because she wears glasses and easily blends into the background of lockers and noticeboards. Jennifer is the cheerleader extraordinaire with pneumatic lips and a jock soliciting gaze that gives man-eating a whole different meaning – especially when a night with a Satan-worshipping emo band goes horribly wrong.

Jennifer’s Body tries so hard to be progressive in a genre that’s struggled to move on since Scream. In fact it does resemble Wes Craven’s post-modern masterpiece but with none of the knowing irony.

It attempts to be subversive with the genre dynamics on a very simple, base level by having the traditionally male killer embodied by the heightened femininity of the stunning Fox.

Sexuality has always been a subtext in horror, usually as a warning to frivolous adolescents that frolics beneath the sheets will lead to an eternity beneath the ground. Here it’s simply that Jennifer is smoking hot and she kills in order to survive.

It’s so obviously a metaphor for growing up, with newly discovered desires and biological changes, and it was carried off with much more aplomb in Ginger Snaps and Carrie – and both of those were actually scary.

Diablo Cody’s script is much more accessible (read “dumbed down”) than her Oscar-winner Juno. There are flashes of her signature youth speak in snippets such as “move on dot org”, as well as some wonderfully inventive lines like “sandbox dreams never die”, but they only highlight how lacklustre the rest of the script is.

Fox is fine as the succubus femme fatale, sending up her lads mag image and having a riot while doing so. Her next challenge should rely more on acting chops than lifting her leg over a motorcycle and then we can truly judge whether there is more than meets the eye.

The true star is the unsung Seyfried, who is neatly crafting out a career that her Mean Girls co-star LiLo would swap a session in the tanning salon for.

It could have been the new Heathers. Instead it’s a fumbled, derivative, unfunny comedy that’s also an even worse scary movie.