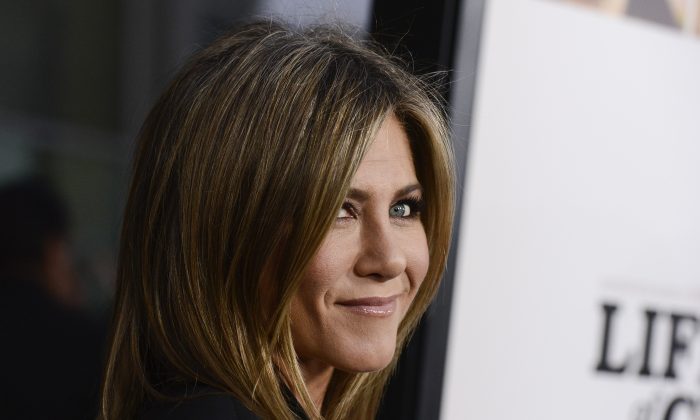 Actress Jennifer Aniston attends the premiere of the feature film "Life of Crime" at the ArcLight Hollywood on Wednesday, Aug. 27, 2014 in Los Angeles. (Dan Steinberg/Invision/AP Images)
US

A new report is claiming that Jennifer Aniston of “Friends” fame is nearly three months pregnant.

An increasingly protruding belly is the cause for the claim, the report in Ok! Magazine says.

“Buzz in Jen’s inner circle is that she’s nearly three months along but doesn’t want the news to come out until she knows for sure that the baby will be okay,” an unnamed source close to the actress said.

Other sources said that Aniston is not taking any chances because there are many risks to having a child at her age. She’s currently 45 years old.

“She knew the older she got, the harder it would be to get pregnant, so she had her eggs frozen. With regular attempts at in vitro fertilization, she was hoping to get lucky, but she didn’t dare think about it too much because of the chance for disappointment.”

“It’s always such an issue: Are you married yet? Have you had babies yet?” she said. “I don’t have this sort of checklist of things that have to be done… and if they’re not checked, then I’ve failed some part of my feminism or my value as a woman because I haven’t birthed a child.”

But sources said that the comments were meant to throw people off.

There have been numerous reports of Aniston supposedly being pregnant, though none of them have proven correct.