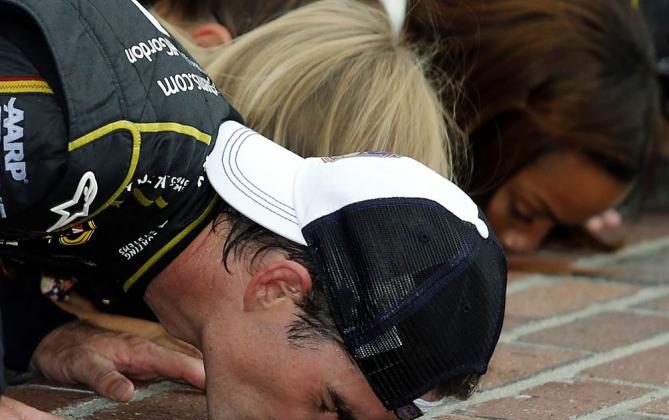 And it was. He made sure of that.

“I don’t think there is a greater feeling for a racecar driver and a race team,” Gordon, 42, said. “I can’t believe this just happened.”

Gordon, who grew up in Indiana, won the inaugural Brickyard 400 at age 23. The four-time Cup champion had not won at Indy since 2004, however, as he began to win less frequently that he did during the heyday of his glorious career.

But Gordon proved Sunday that he is indeed back, scoring his fifth Indy win during a season when he continues to lead the Sprint Cup standings in pursuit of a record fifth championship. The win was Gordon’s second of the season.

“This is for all those fans through all the years who have said you can get No. 5,” Gordon said. “We got No. 5 today.”

Kahne dominated most of the race and held the lead on a restart with 17 laps to go, but Gordon had a great restart and blew to the outside of him in Turn 1 to go ahead. Kahne faded to sixth and seemed to indicate that Gordon might have jumped the green flag.

“Looking back, I should have chosen the (outside lane),” Kahne said. “They pretty much let Jeff control that restart. I took off and never spun a tire, and the inside had been more grip throughout the race, and I started on the inside and I thought it was a great decision. But I didn’t spin a tire and Jeff drove right by me before we even got to the second (restart line).”

Kahne, who was running low on fuel, was probably not going to be able to hold off Gordon anyway.

“There was no catching him, definitely not,” Busch said. “Those guys were really, really fast.”

The victory was not only big for Gordon, but for his Hendrick team, which has failed to keep pace with the dominant Johnson the past several years. Both Johnson and teammate Dale Earnhardt Jr. visited victory lane to congratulate Gordon.

“I’ve wanted to win this race my whole life,” crew chief Alan Gustafson said. “To win here, at this place and the history of this racetrack and Jeff’s amazing record here, this is the one for me.”

“I told him this morning, this is your day,” team owner Rick Hendrick said of Gordon. “He has been so good on the long runs at every track and he gets around here so well. For him to break that tie, that’s pretty special. We’re a little bit older than we were 20 years ago, but it’s a great win. I remember how the first one felt, this one feels just as good.”

Kahne led at the halfway point and blasted past Clint Bowyer on a restart on Lap 101 to regain the lead. Gordon, who led 20 laps early in the race, was fifth on the restart but ran down Bowyer, Harvick and Busch during the next green-flag run.

Kahne held the lead during the final round of green-flag pit stops but came out of the pits with Gordon right on his bumper challenging for the lead. They were battling for the win when a caution flag flew with 22 laps remaining. Kahne, Gordon and the top seven drivers declined to pit and stayed on the track during the caution, setting up the dramatic restart.

Gordon nailed this one.

“I’m not very good on restarts and wasn’t very good today,” he said. “But I finally made the restart of my life today when it counted most. I knew we had a great racecar, we just needed to get out front.

“Kasey just kinda hung back and I kinda got a little ahead of him and had to back up, but once we got down into 1 and 2, I could hear him getting loose. I’m kinda glad he took the inside because I wanted the outside. I have to thank him because he raced me clean. It could have gotten real ugly down there. Once I got clear of him down there, I was like, I can’t believe this is happening.”

Gordon’s next mission was to block out his emotions and finish off the 90th win of his career.

“I was trying so hard with 10 laps to go not to focus on the crowd,” he said. “I could see everyone when I glanced up there, see the reaction. I was trying not to let it get to me and not think about it too much. But you can’t help it. It’s just a big race and such an important victory and a crucial moment in the season and championship and those emotions take over.”

Afterward, Gordon got to join his family and team in the ceremonial kissing of the bricks at the start/finish line — a NASCAR tradition at Indy.

“To have my kids here, there is nothing better than to come to victory lane, especially in one of the biggest races with your family here,” he said.

In a race that featured wildly different pit and fuel strategy, Hamlin gambled on fuel mileage and was in a position to win until his team did not get his car full of fuel on a Lap-91 stop.

“Had we got it full that second-to-last stop, we were going to have our 15-second lead with enough fuel to make it,” Hamlin said. “That part is frustrating, but it also was a good run for us.”

Hamlin’s car failed potrace inspection, however, which could lead to penalties.

With the win, Gordon became the seventh multiple winner this year, which could be big when it comes to seeding for the 16-driver Chase for the Sprint Cup. He won one race last year.

Danica Patrick was hoping for a good run on her best track. She was running 12th when she broke the axle in her car, however, during a Lap-67 pit stop. She spent 28 laps in the garage before returning.