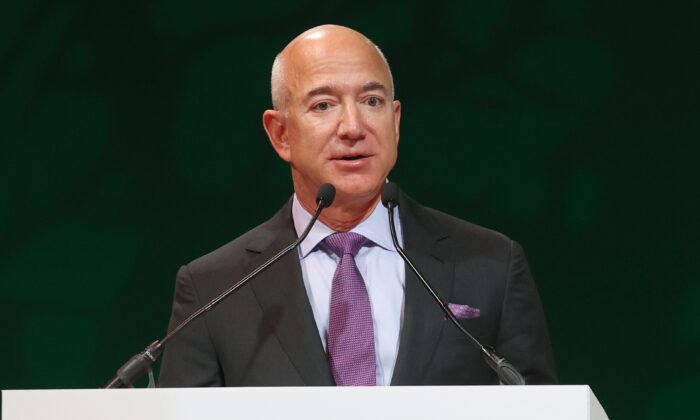 Jeff Bezos speaks during an Action on Forests and Land Use event on day three of COP26 in Glasgow, Scotland, on Nov. 2, 2021. (Chris Jackson/Getty Images)
By Emel Akan

Jeff Bezos, the billionaire founder of Amazon, ramped up his criticism of President Joe Biden on May 15, saying that the “misdirection” coming from the White House isn’t helping the country.

Bezos, like many economists, criticized the administration’s attempts to stoke an already overheated economy with further stimulus. He said inflation mostly harms the poor.

“In fact, the administration tried hard to inject even more stimulus into an already over-heated, inflationary economy and only [West Virginia Democratic Sen. Joe] Manchin saved them from themselves,” he wrote on Twitter. “Inflation is a regressive tax that most hurts the least affluent. Misdirection doesn’t help the country.”

In fact, the administration tried hard to inject even more stimulus into an already over-heated, inflationary economy and only Manchin saved them from themselves. Inflation is a regressive tax that most hurts the least affluent. Misdirection doesn’t help the country. https://t.co/a8cygcunEG

The statement from Bezos was in response to a thread on Twitter, in which Biden claimed credit for the reduction of the federal budget deficit.

“Under my predecessor, the deficit increased every single year,” Biden wrote on Twitter on May 14. “This year, we’re on track to cut the deficit by $1.5 trillion—the biggest one-year decline ever. It matters to families, because reducing the deficit is one of the main ways we can ease inflationary pressures.”

However, critics have contended that Biden is distorting reality when he says that he’s directly responsible for the decline in the deficit while, in fact, government expenditures have been decreasing from extremely high levels because of the end of temporary COVID-19 pandemic relief spending.

This is the second time recently that Bezos has criticized the Biden administration. Amazon’s founder earlier criticized a Biden Twitter post over inflation and business taxes.

“You want to bring down inflation? Let’s make sure the wealthiest corporations pay their fair share,” Biden wrote on Twitter on May 13.

In response to Biden’s post, Bezos said blaming companies was “misdirection” and that the president should be subject to his own disinformation board.

“The newly created Disinformation Board should review this tweet, or maybe they need to form a new Non Sequitur Board instead,” Bezos wrote. “Raising corp taxes is fine to discuss. Taming inflation is critical to discuss. Mushing them together is just misdirection.”

These Twitter posts are believed to be the billionaire’s first public spat with Biden.

Biden has recently proposed a new minimum tax on billionaires as part of his 2023 fiscal year budget plan. The president has requested that Congress approve a law requiring the wealthiest U.S. households to pay a minimum tax rate of 20 percent on their entire income, including unrealized investment income.

It’s uncertain whether the tax proposal will be approved by Congress; it’s been criticized for adding to the complexity of the tax code.