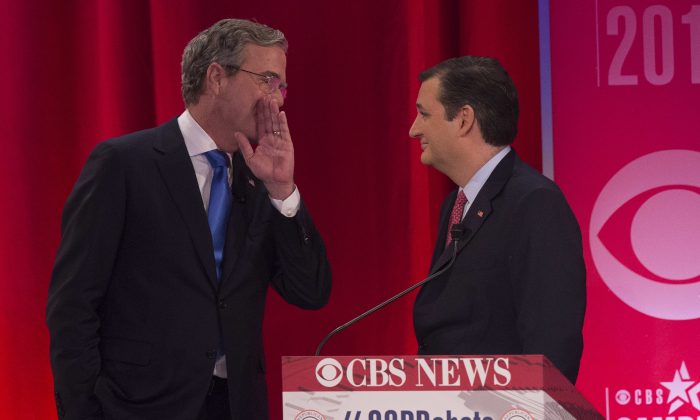 On March 23, Jeb Bush announced that he was endorsing Ted Cruz. The endorsement comes over a month after Bush ended his bid for presidency on Feb. 20.

In a statement released by the Cruz campaign reported by Politico, Jeb Bush said, “Ted is a consistent, principled conservative who has demonstrated the ability to appeal to voters and win primary contests.”

The statement continues: “For the sake of our party and country, we must move to overcome the divisiveness and vulgarity Donald Trump has brought into the political arena, or we will certainly lose our chance to defeat the Democratic nominee and reverse President Obama’s failed policies.”

When campaigning for president, Jeb Bush poised himself early on as the “anti-Trump” candidate during the debates, and was often critical of the frontrunner in interviews and on Twitter.

Marco Rubio could have used Bush’s endorsement when campaigning in their home state of Florida, but the endorsement never came, and Rubio dropped out after losing the state.

A source from Politico says that Bush will “actively support Senator Cruz’s bid,” but it’s unknown whether the two will appear together for rallies, or if Bush will be doing fundraising for Cruz.

Does Ted Cruz Have a Chance at the Republican Nomination?

“I’m truly honored to earn Governor Jeb Bush’s support … Governor Bush was an extraordinary governor of Florida, and his record of job creation and education innovation left a lasting legacy for millions of Floridians.

“His endorsement today is further evidence that Republicans are continuing to unite behind our campaign to nominate a proven conservative to defeat Hillary Clinton in November, take back the White House, and ensure a freer and more prosperous America for future generations,” Cruz said.

Jeb Bush’s endorsement caps off a week of endorsements for Cruz from establishment Republicans like  Mitt Romney, Lindsey Graham, and others.