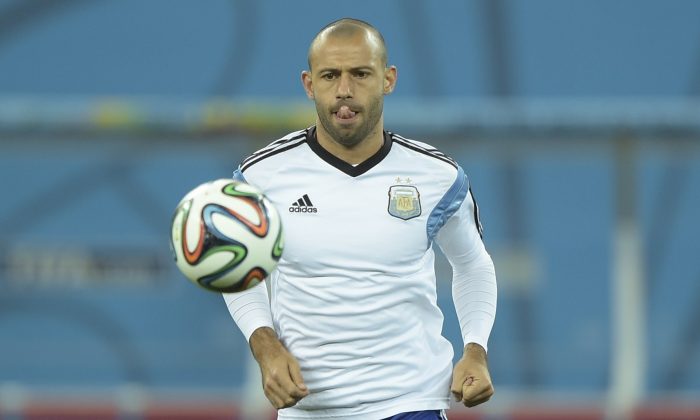 Javier Mascherano will not be returning to Liverpool.

The 30-year-old midfielder signed a four-year-extension with a buyout clause of €100million ($136 million) that will see him at Camp Nou until 2018.

Mascherano was linked with a move back to Merseyside, a transfer to Napoli, and a number of other clubs, but he finally decided to stay with Barcelona.

There is an exodus of big-name players from Barcelona as new manager Luis Enrique looks to put his stamp on the side. Cesc Fabregas has already left for Chelsea, and Alexis Sanchez is primed for a move to Arsenal.

Brazilians woke up Wednesday to dreadful headlines describing the shame and humiliation of their soccer team’s historic 7-1 defeat to Germany in a World Cup semifinal.

One of the country’s leading soccer publications, Placar, stated simply: “A day to forget.”

“It was the most shameful performance of all time,” said Almir Rogelio, 32, who was looking at the doomsday headlines at a newsstand in central Sao Paulo. “I honestly woke up and didn’t even want to remember what happened.”

Dreams of a sixth championship shattered in the first half hour of the game when Germany was already leading by a numbing 5-0. Many fans in the Belo Horizonte stadium left by halftime when it became clear Brazil was being routed at home. Some tore up their tickets and gave the thumbs down to TV cameras.

In Sao Paulo, where thousands gathered to watch the match in the neighborhood of Vila Madalena, a man clung to a street pole and cried loudly, as another fan nearby banged his head against a bar table.

“It was a tragedy. Sad, very sad, the greatest defeat in all the history of the Brazilian national team,” wrote Tostao, one of Brazil’s forwards on its 1970 World Cup championship team and now a sports columnist for the Folha de S. Paulo newspaper.

Most heartbreaking for many Brazilians was suffering the country’s worst Cup defeat in its own backyard, as it hosted the tournament for the first time in 64 years.

“It was embarrassing. They have some nerve with the Brazilian people. We deserved so much better,” said Manuel Alves, 58, as he stood on a main business avenue in Sao Paulo. “The worst was all the money spent, having so many other problems that need to be fixed.”

Brazil spent more than $13 billion preparing for the tournament, and the high cost ignited angry protests against the World Cup during the past year. Demonstrators have complained about so much being spent while the nation suffers from woeful public services.

After the loss, many Brazilians returned to questioning whether holding the event was worth it, a bad omen for President Dilma Rousseff. She is campaigning for a re-election bid in October that many think could be made tougher by the soccer team’s poor showing.

There were also reports of violence breaking out right after the game with many buses being torched in Sao Paulo — but it wasn’t clear if the vandalism was linked to the Cup loss. At least one store selling electronics and household appliances was sacked, but there were no immediate reports of injuries.

“Like many Brazilians, I’m very, very sad because of this defeat,” Rousseff said as she took to Twitter to try to rally the nation. “I feel bad for all of us — for fans and for our players. But let’s not be broken. Brazil, ‘get up, shake off the dust and come out on top.'”

Although few thought Brazil’s humiliating loss would spark renewed mass protests, it is sure to put a severely sour taste back into the mouths of the nation’s fans. Many say the loss to Germany was such a shock that it has actually closed the wound inflicted when Uruguay beat Brazil 2-1 in the 1950 World Cup championship match in Rio de Janeiro.

“We feel so lost, like a dog that falls out of a truck,” said accountant Joao Bosco as he sipped beer at a Sao Paulo diner. “We’ll remember this humiliation. It will play in our minds over and over again, forever.”