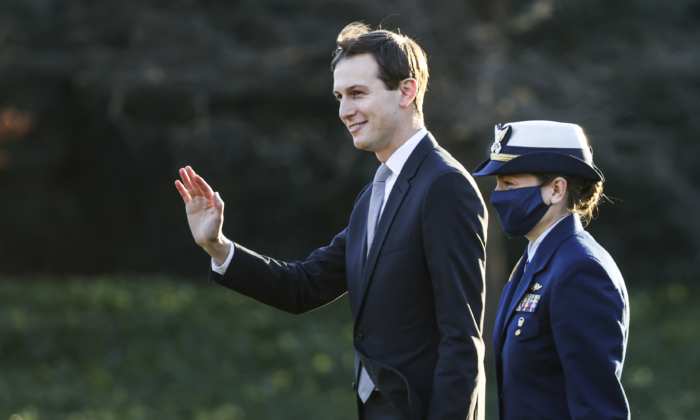 Senior adviser to the president Jared Kushner walks on the south lawn of the White House to board Marine One on Dec. 23, 2020. (Tasos Katopodis/Getty Images)
Donald Trump

Former senior White House adviser Jared Kushner has made his first public remarks since departing the White House earlier this year, penning an op-ed about the opportunity for peace in the Middle East.

In the opinion article, titled “Opportunity Beckons in the Mideast” published in The Wall Street Journal on March 14, Kushner argues that the Biden administration would be mistaken not to build on the successes of the Trump administration in the region.

Kushner was one of four Trump administration officials nominated for the Nobel Peace Prize in February for their roles in negotiating four normalization deals between Israel and Arab nations.

Kushner, who is the husband of Ivanka Trump, a daughter of former President Donald Trump, highlighted the Trump administration’s 2017 state visit to Saudi Arabia. In a speech in Riyadh during that trip, Trump rallied the Arab world against what he argued was a common adversary, radical Islamic extremism and the Iranian regime, the ideology’s biggest sponsor.

“As the custodian of the two holiest sites in Islam, Saudi Arabia has made significant progress in combating extremism, which has greatly reduced America’s risk of attack and created the environment for today’s new partnerships,” Kushner wrote. “In Mr. Trump’s final deal before leaving office, he brokered the end of the diplomatic conflict between Qatar and Saudi Arabia, restoring an important alliance to counter Iran.”

Kushner hasn’t made any formal public appearances or remarks since departing the White House on Jan. 20. Ivanka Trump made some headlines a week earlier after she was sighted delivering food boxes in Apopka, Florida, as part of the Trump administration’s “Farmers to Families” food box program.

The former president made his first public appearance since leaving office two weeks ago on Feb. 28, when he delivered a speech to the Conservative Political Action Conference in Florida.

Kushner notably praised the Biden administration’s handling of Iran, arguing that President Joe Biden’s existing relationship with the nation’s leadership was an advantage that Trump didn’t have.

“While many were troubled by the Biden team’s opening offer to work with Europe and rejoin the Iran deal, known as the Joint Comprehensive Plan of Action, I saw it as a smart diplomatic move,” Kushner wrote. “The Biden administration called Iran’s bluff. It revealed to the Europeans that the JCPOA is dead and only a new framework can bring stability for the future. When Iran asked for a reward merely for initiating negotiations, President Biden did the right thing and refused.”

Kushner, who led Trump’s efforts for peace in the Middle East, said the Biden administration would do well to take a patient approach with Iran because the nation is in a tight financial squeeze due to the sanctions imposed by Trump.

“Iran is feigning strength, but its economic situation is dire and it has no ability to sustain conflict or survive indefinitely under current sanctions,” Kushner wrote. “America should be patient and insist that any deal include real nuclear inspections and an end to Iran’s funding of foreign militias.”

He said the Biden administration stands to make progress by following the roadmap of the previous administration, pointing out that the Arab world is already starting to thrive since nations are no longer boycotting Israel. He noted that Oman, Qatar, and Mauritania are on the brink of joining the Abraham Accords.

“These relationships should be pursued aggressively—every deal is a blow to those who prefer chaos,” Kushner wrote.

The former White House adviser underlined that the most important relationship that has seen improvement is the one between Israel and Saudi Arabia. The relations could be normalized if the “Biden administration leads,” Kushner wrote.

“The table is set,” he wrote in conclusion. “If it is smart, the Biden administration will seize this historic opportunity to unleash the Middle East’s potential, keep America safe, and help the region turn the page on a generation of conflict and instability. It is time to begin a new chapter of partnership, prosperity and peace.”