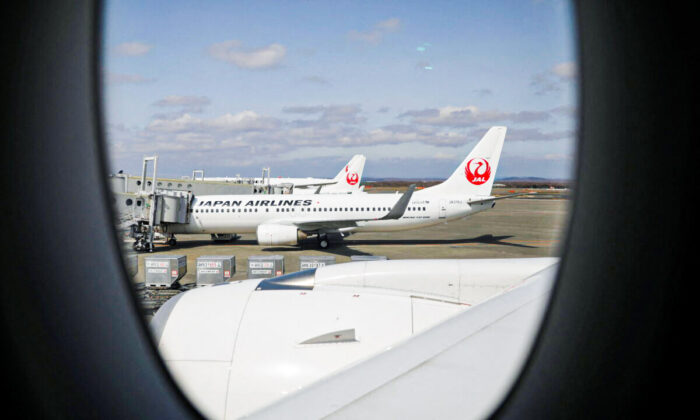 Japan Airlines and All Nippon Airways (ANA) said on Jan. 19 that they would restore flights to the United States after the deployment of 5G transmitters in several American airports prompted them and other foreign carriers to cancel numerous U.S. bound flights.

The two Japanese airlines said they had been assured by the Federal Aviation Admin (FAA) there would be no safety issues after the announcement of reduced wireless deployment.

Both airlines will resume Boeing 777 service to the United States on Jan. 20 after previously announcing cancellations based on guidance from Boeing.

“As the launch of the 5G service in the U.S. has now been partially postponed, operation of ANA flights from January 20 will follow the normal schedule based on FAA notification that there is no safety issue with the operation of Boeing 777 aircraft to the US airports that we serve,” said Yuji Hirako, President of ANA.

AT&T and Verizon Communications decided to delay the Jan. 19 activation of their 5G telecom masts near key U.S. airports the day before, following protests from airlines about possible electronic interference.

The White House, which had negotiated with both the aviation and telecommunications industries, praised the move, but it came too late to avoid a cascade of cancellations on the 19th.

Airlines across the world had said they were cancelling some flights or switching models, with much of the initial disruption hitting the Boeing 777, a major workhorse whose flight electronics are sensitive to 5G.

Emirates, based in Dubai and the largest user of the Boeing model, declared on Jan. 18 that it was suspending flights to nine U.S. airports, with its president calling the proposed rollout “one of the most delinquent, utterly irresponsible” episodes he has seen.

However, Emirates said that it would continue flying the Boeing 777 to Washington D.C., which has yet to deploy 5G towers.

Air India said that its four U.S. flights would be curtailed or would switch aircraft types from the Boeing 777 until the issue was resolved.

In Europe, British Airways and Lufthansa switched their daily U.S. flights to Airbus A380s from the Boeing 777 and cancelled or modified some U.S. flights.

In East Asia, Singapore Airlines and Korean Air Lines said they had switched their aircraft used on U.S. bound passenger and cargo flights.

Taiwan’s China Airlines and Hong Kong’s Cathay Pacific also said they would change aircraft models if required and that they would reschedule certain flights to the United States.

However, not all 777 flights have been affected, as Qatar Airways and Air France said their U.S. routes were operating as scheduled.

Israel’s El Al and Abu Dhabi’s Etihad Airways said their services had not been affected, while Kenya Airways said it was taking precautions as outlined by Boeing and the FAA.

Meanwhile, United Airlines said that it forecast only “minor disruptions at some airports due to the remaining 5G restrictions,” and praised the compromise between the telecoms and airlines that had prevented “mass cancellations across the aviation industry.”

The flight disruptions are the pinnacle of a weeks-long dispute between the airline industry and telecom giants Verizon and AT&T over the deployment of 5G mobile services in U.S. airports.

Several major airlines and the FAA had warned that the frequencies and transmission strength from 5G could interfere with the precise altitude readings on radio altimeters used for bad-weather landings on certain jetliners.

Radio altimeters give precise readings of the height above the ground on approach and help with automated landings, as well as verifying that the aircraft has landed before allowing reverse thrust.

Although European regulators have said that no risks have been found elsewhere, dozens of flights were cancelled or modified, pushing shares in European long-haul carriers down about 2 percent.

Japan, which was better prepared for the 5G launch, announced last year, “To avoid the blocking of radio altimeters, the location of the high-power 5G base station should be avoided within 200m from the approaching route of aircraft.”

Boeing said it was working with all parties for a “data-driven solution for the long-term that ensures all commercial airplane models can operate safely as 5G is deployed.”

The FAA is updating guidance on which airports and aircraft models are affected to dramatically lessen the impact of the nearly 1,500 notices of 5G restrictions that it previously issued.

The agency said that it has approved 62 percent of the U.S. commercial fleet to perform low-visibility landings at airports with 5G, but that “even with these approvals, flights at some airports may still be affected.”

“The FAA also continues to work with manufacturers to understand how radar altimeter data is used in other flight control systems. Passengers should check with their airlines for latest flight schedules.”