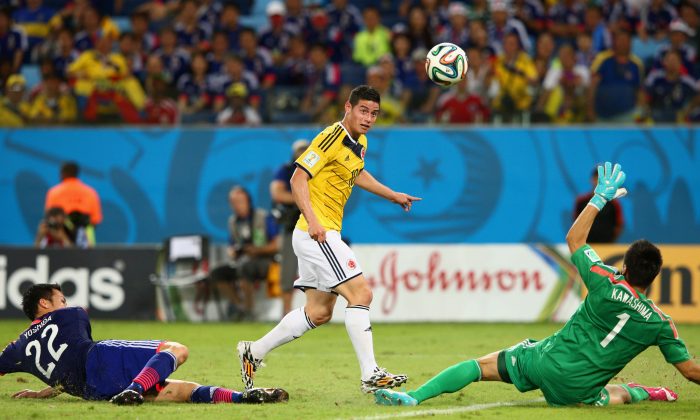 Check out the highlights of the match below.

Rodriguez completes the rout of Japan with his 89th minute goal. Adrián Ramos provided the assist.

Martinez and Rodriguez combined again to great effect in the 82nd minute and make it 3-1 to Colombia.

Shinji Okazaki headed a ball in from the center of the box to the bottom right corner during stoppage time of the first half to put Japan level with Colombia.

Juan Cuadrado scored a penalty for Colombia in the 17th minute.

The referee gave Colombia a penalty after Yasuyuki Konno brought Adrián Ramos down in the penalty box.

CUIABA, Brazil (AP) — James Rodriguez scored a brilliant goal and set up two more for Jackson Martinez as Colombia routed Japan 4-1 on Tuesday to confirm top spot in Group C and eliminate the Asian champions from the World Cup.

Already assured of advancing, Colombia guaranteed first place with its third straight win, setting up a second-round match against Uruguay.

The Colombians started with a virtual second-string lineup but still went in front when Juan Cuadrado — one of the few regular starters — drilled in a 17th-minute penalty.

Japan equalized with the last touch of the first half through Shinji Okazaki’s header but Martinez scored in the 55th and 82nd minutes — both from superb passes from substitute Rodriguez — to put the result beyond doubt.

Rodriguez capped it off with his stunning solo goal in the 89th, turning his marker inside out before chipping the advancing goalkeeper with a deft finish that bore all the hallmarks of the great Lionel Messi.

That made it nine goals for Colombia in the group stage, and the South Americans are proving to be the World Cup’s big entertainers.

The introduction of Rodriguez tilted the game back Colombia’s way after Japan finished the first half stronger, with Okazaki’s goal having given Alberto Zaccheroni’s side a slim chance of progressing.

Although Japanese fans will have been keeping one eye on the match being played simultaneously between Ivory Coast and Greece in Fortaleza, their players only had one mission: win three points and see if that would be enough.

It didn’t open to plan, with Japan going behind to a penalty that was needlessly given away by Konno, who lunged into a challenge on Adrian Ramos.

Despite Japan’s protests, it was a clear foul and Cuadrado had no difficulty converting the spot kick.

The goal left Japan susceptible to the counter-attack as they pushed forward in search of two goals.

At the other end, there was a lack of cutting edge — Shinji Kagawa had a weak shot saved and Keisuke Honda wasted three free kicks from good positions — before Honda crossed for Okazaki to head in at the near post with what was the last touch of the half.

Rodriguez — one of many regulars rested at the start by coach Jose Pekerman — was introduced for the second half and he made an immediate difference, livening up the crowd and the team’s attacking play with his turn of speed and precision passing.

Within 10 minutes, he had created Martinez’s goal, running onto the ball and playing in his teammate with a cute pass for the striker to take one touch and shoot left-footed low into the corner.

The FC Porto striker made it 3-1 with a curling left-foot finish, this time following a reverse pass from Rodriguez.