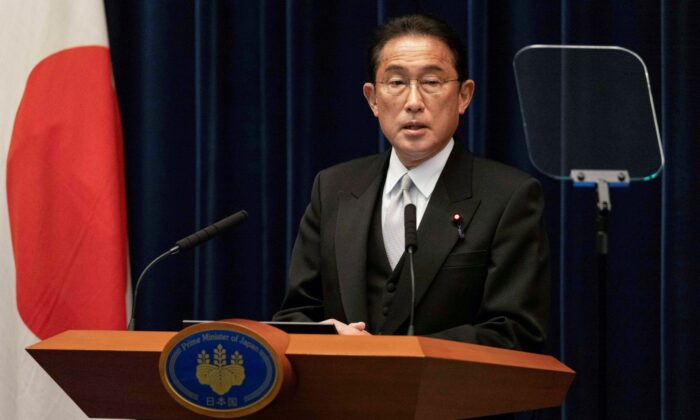 Japanese Prime Minister Fumio Kishida speaks during his press conference, after the parliament reelected him as prime minister, in Kantei, Japan, on Nov. 10, 2021. (Stanislav Kogiku/ Pool via Reuters)
Asia & Pacific

Japanese Prime Minister Fumio Kishida said the country will temporarily suspend new arrivals of all foreign visitors from Nov. 30 onward to prevent the spread of the Omicron variant of the CCP virus, a new variant first identified in South Africa.

Speaking to reporters at the his office on Nov. 29, Kishida said the emergency measures were imposed to prevent “a worst-case scenario” in Japan.

“These are temporary, exceptional measures that we are taking for safety’s sake until there is clearer information about the Omicron variant,” he said.

Japan became the second country to impose travel bans on all foreign tourists in response to the Omicron variant, after Israel. Kishida said Japanese citizens and foreign residents reentering Japan from 14 countries where cases of the Omicron variant have been detected will be required to quarantine in designated facilities.

The prime minister urged people to wear masks and maintain social distancing until further details of the new variant are known.

The move came after the government announced on Nov. 26 that it will tighten border controls on people arriving from six African nations, including South Africa, Eswatini, Zimbabwe, Namibia, Botswana, and Lesotho.

One traveler from Namibia was found to be positive for the CCP (Chinese Communist Party) virus, commonly known as the novel coronavirus, but it has yet to be determined whether the person was infected with the Omicron variant, health minister Shigeyuki Goto said on Nov. 29.

Goto said the sample had been sent for the authorities to analyze the genome.

On Nov. 26, the World Health Organization (WHO) classified Omicron as a “variant of concern” amid fears that the variant could be more contagious and evade the protection of vaccines. The WHO stated that the new variant “has been detected at faster rates than previous surges in infection, suggesting that this variant may have a growth advantage.”

The detection of Omicron triggered global alarm as governments around the world scrambled to impose new travel curbs and financial markets sold-off, fearing the variant could resist vaccinations and upend a nascent economic reopening after a two-year global pandemic.

More countries imposed travel curbs on southern African nations, but South Africa denounced the measures as unfair and potentially harmful to its economy, saying that it is being punished for its scientific ability to identify CCP variants early.

Meanwhile, Singapore and Malaysia reopened mutual borders for vaccinated travelers on Nov. 29 after nearly two years of closure that caused tens of thousands of people to be stranded on both sides, although there were concerns the border might be closed again due to the new variant.